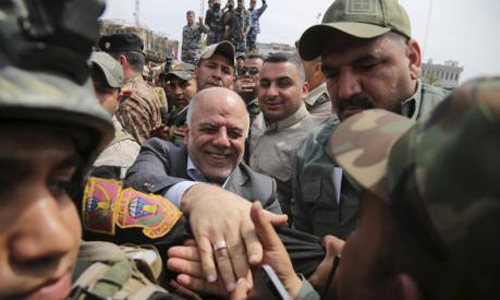 TIKRIT, IRAQ - The Iraqi government claimed victory over Islamic State insurgents in Tikrit on Wednesday after a month-long battle for the city supported by Shi'ite militiamen and U.S.-led air strikes, saying that only small pockets of resistance remained. State television showed Prime Minister Haidar al-Abadi, accompanied by leaders of the army and police, the provincial governor and Shi'ite paramilitary leaders, parading through Tikrit and raising an Iraqi flag. The militants captured the city, about 140 km (90 miles) north of Baghdad, last June as they swept through most of Iraq's Sunni Muslim territories, swatting aside a demoralized and disorganized army that has now required an uneasy combination of Iranian and American support to get back on its feet. With explosions and gunfire still audible, and columns of smoke dotting the horizon, Interior Minister Mohammed al-Ghabban told reporters that security forces were fighting to clear the city's last Islamic State holdout, the northern neighborhood of Qadissiyah. "Most of Tikrit today is liberated, only small parts remain (outside our control). We will give you the good news in the next few hours after eliminating the pockets that are still in the city," he said. Speaking in an abandoned cityscape scarred by gunfire, Ghabban said his federal police had fought for every house and road and were now working to de-mine Tikrit, a city with a pre-war population of a quarter of a million, which he said was full of booby traps planted by Islamic State. ASSERTION OF AUTHORITY Ghabban and Abadi's appearances were an assertion of government authority after a military campaign bolstered and initially spearheaded by Iranian-backed Shi'ite militiamen, who have outnumbered the army in the fight against Islamic State since the security forces deserted en masse last summer. When the battle to recapture Tikrit began on March 2, the defense and interior ministers were largely bypassed by the Shi'ite militias, referred to as Popular Mobilization Committees, according to accounts by two senior officials and a Western diplomat, all speaking on condition of anonymity. The U.S. government, which leads a coalition supporting the fight against Islamic State with air strikes, was also upset, both by the sight of an Iranian-backed force leading the fight for Tikrit and by the government's failure to consult it on the plan, the officials said. With tensions rising along with Shi'ite casualties, the Tikrit offensive was halted after two weeks. It only resumed last week after Abadi called in U.S.-led air strikes over the objections of the militias, which had wanted to claim the victory for themselves and their Iranian backers, much to the displeasure of Washington, Iran's long-time adversary. Most of the militias boycotted the push by the Iraqi army and federal police, backed by U.S.-led air strikes, until Tuesday, when they rejoined the campaign. Whereas previous defeats of Islamic State around central Iraq have mostly been credited to the Popular Mobilisation committees, government officials sought to paint the entry into Tikrit as a national triumph. Abadi vowed that Islamic State would be driven from the Iraqi territory it still holds, which still includes most of Iraq's Sunni lands, including Anbar province in the west and most of Nineveh to the north. - REUTERS