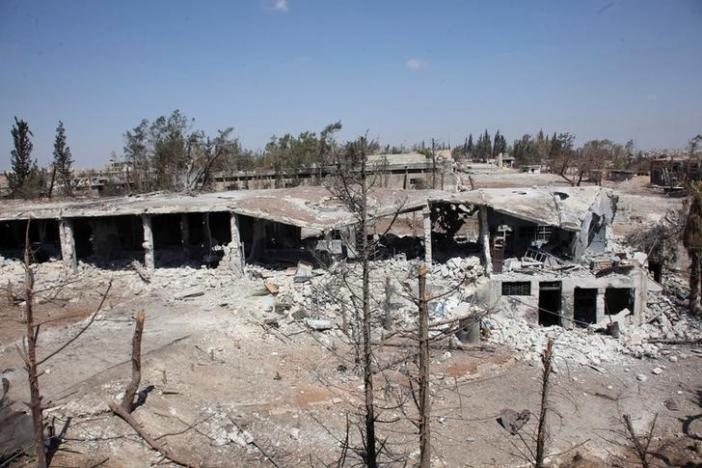 BEIRUT/BAGHDAD – An Iraqi Shi'ite militia said on Wednesday it had dispatched more than 1,000 fighters to the frontline in neighboring Syria, escalating foreign involvement in the battle for Aleppo, the biggest prize in five years of relentless civil war.
New footage emerged of civilians choking in the aftermath of an apparent attack with poison chlorine gas on an opposition-held district as the battle for Syria's biggest city approaches what could be a decisive phase. Aleppo has been divided for years into government and rebel sectors, but President Bashar al-Assad's army has put the opposition areas under siege and now hopes to capture the whole city in what would be a devastating blow to his enemies. Government forces are backed by Russian air power and battle-hardened Lebanese and Iraqi Shi'ite militia fighters under the apparent oversight of an Iranian general. The arrival of reinforcements from Iraq, where Shi'ite militia are fighting their own war against the Islamic State group, shows how the Syrian and Iraqi conflicts have leapt borders, to become a broad sectarian war across the Middle East. Hashim al-Moussawi, a spokesman for the Iraqi Shi'ite militia Harakat al-Nujab, said its fighters would reinforce areas captured from the rebels in southern Aleppo. The militia's Twitter account showed pictures of its fighters at the Syrian front with Iranian Major General Qassem Soleimani, commander of foreign operations for the elite Revolutionary Guards, who has led operations by Tehran's allies in both Syria and Iraq. Rebel commanders said they are preparing to launch their own counter-offensive aimed at breaking the siege of the city, which was reimposed in recent days following weeks of intense fighting around a military complex. Rebels lost the complex of military colleges to pro-government forces on Sunday near the Ramousah area of southwestern Aleppo, where they had opened a way into the city. Five years after the multi-sided war began, hundreds of thousands of people have been killed and 11 million - half of Syria's pre-war population - displaced. But there is little sign that any party is poised for victory or can restore stability, and foreign powers are becoming more involved. In recent weeks, Turkey has sent its troops across the border to combat Islamic State and Kurdish fighters. The United States, which is trying to negotiate a ceasefire with Russia, has backed Kurdish forces advancing against Islamic State. Meanwhile, the plight of some 250,000 civilians trapped in rebel-held districts of Aleppo has spurred international efforts to agree a new humanitarian truce. But Russian Foreign Minister Sergei Lavrov and U.S. Secretary of State John Kerry have not reached agreement over the details of a ceasefire. POISON GAS Western countries, Turkey and most Arab states oppose both Assad's government and Islamic State, while supporting other anti-Assad factions. Russia and Iran support Assad. The latest apparent poison gas attack adds to a litany of what Assad's opponents say is deliberate targeting of civilians, often with banned weapons, to force rebels to surrender. Footage of the apparent chlorine gas attack on the Sukari district, near Aleppo's main battlefield in the city's southwest, showed crying children being doused with water and then lying on hospital beds and breathing through respirators. Rescue workers in the rebel-held area said army helicopters had dropped the chlorine in incendiary barrel bombs, an accusation the government has rejected. "We have not and will not use at any point this type of weapon," a Syrian military source said, accusing rebels of making false accusations to distract attention from their defeats. However, the government has a history of being accused of similar attacks. An inquiry by the United Nations and Organization for the Prohibition of Chemical Weapons (OPCW) seen by Reuters last month said the Syrian army had been responsible for two chlorine gas attacks in 2014 and 2015. In 2013 Western countries accused Assad's government of attacking a Damascus suburb with nerve gas. At the time, Assad fended off a threatened U.S. bombing campaign only by agreeing to give up his arsenal of chemical weapons, later destroyed by the OPCW. But Syria still possesses chlorine, which is used for water purification and other legitimate industrial processes. Ramousah, its surroundings, and the countryside between it and the village of Khan Touman seven km (four miles) to its southwest were the site of intense bombardment by Russian jets and attacks by Shi'ite militias in recent weeks, rebels say. On Tuesday night, jets bombed Khan Touman and neighboring areas, and intense clashes took place in Ramousah and its surroundings, with rebels targeting an army tank, the Syrian Observatory for Human Rights, a U.K.-based war monitor reported. Rebels also shelled government-held residential districts in western Aleppo, the Observatory reported. "All the (rebel) factions are trying to prepare themselves to launch a new attack on the regime positions in Ramousah. It's not over," a senior source in the insurgency said. –Reuters