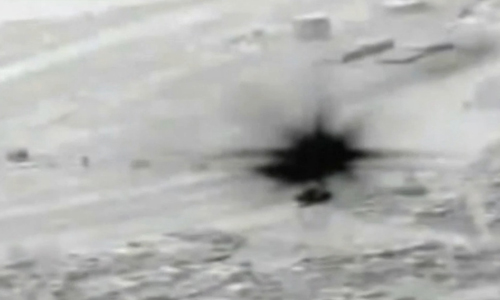 BAGHDAD - Iraqi special forces advanced on central Tikrit on Thursday as US-led coalition planes joined the largest offensive yet against Islamic State militants holding out in Saddam Hussein's home city. Coalition jets launched their first air strikes against Islamic State targets in Tikrit on Wednesday, coming off the sidelines to aid Iraqi forces against the Sunni Islamist militants. Underlying the complex web of loyalties behind the conflict, a senior US general said Washington had demanded the withdrawal of Iranian-backed Shi'ite militias fighting alongside Iraq's government before agreeing to take part. Two Shi'ite militia groups said they were suspending participation in the fight in response to the coalition's involvement. Some of the militias are openly hostile to the United States and have targeted Americans in Iraq in the past, but the fight against Islamic State has put them on the same side. Iraq's Prime Minister Haider al-Abadi, who pressed ahead with a request for coalition air strikes despite opposition from the militia, arrived in Tikrit on Thursday to oversee operations to retake the city. A spokesman for Iraq's Defense Ministry said the coalition had carried out 17 strikes in Tikrit so far, in addition to 24 by Iraq's own airforce. “The Iraqi and coalition air forces conduct strikes in order to remove the enemy and then our forces advance," said General Tahsin Ibrahim Sadiq. "When the attacking forces advance, they clear any pockets of resistance and allow for the rest of our forces to move in and barricade further ahead.” More than 20,000 Iraqi troops and allied Shi'ite paramilitary groups known as Hashid Shaabi have been taking part in the offensive, which began in early March but was brought to a halt around two weeks ago by homemade bombs and booby-traps. Iraqi forces retook the area surrounding Tikrit in the first week of the campaign early this month and entered some districts of the city itself, which had been overrun last June by Islamic State. But the militants have held out for more than three weeks in several areas including a sprawling complex of palaces that was built during Saddam's rule and overlooks the Tigris river. The mayor of Tikrit said coalition and Iraqi planes were striking the palace complex as well as the northern Qadisiya district, part of which is still held by insurgents, and the Shisheen neighborhood in the south. “The focus is on the IS leadership command locations," said mayor Omar al-Tikriti. Targets had to be carefully identified because IS fighters were believed to be holding prisoners in some of the 65 palaces. TWO MILITIAS SUSPEND ROLE The coalition joined the fray in Tikrit at the request of Iraqi military commanders, but Shi'ite militia commanders publicly rejected any US role in the campaign to retake the jihadist bastion. The Kataib Hizbollah and Asaib Ahl al-Haq militias both suspended their participation in Tikrit on Thursday in protest, although the Badr Organisation, which is the largest and most powerful group within the Hashid Shaabi, said it would continue to fight. "We were able to conclude the battle ourselves, but the US came in order to usurp this major victory,” Asaib Ahl al-Haq spokesman Naim al-Uboudi said. Jaafar al-Husseini, a military spokesman for Kataib Hizbollah, criticized Prime Minister Abadi for inviting the coalition to take part and threatened to withdraw from the battlefield. “It is not possible for Kataib Hizbollah or any of the resistance factions to be in the same trench as the Americans." Speaking at an air base where Iraqi planes were taking off to fly sorties over Tikrit, Iraq's Defense Minister Khaled al-Obeidi played down the role of Iranian advisers in the battle. “The Iranian advisers have nothing to do with the work of the air force," Obeidi said. "The Iranians are working with the brothers in the Hashid Shaabi as advisers, and I think their presence is always in the rear positions.” – Reuters