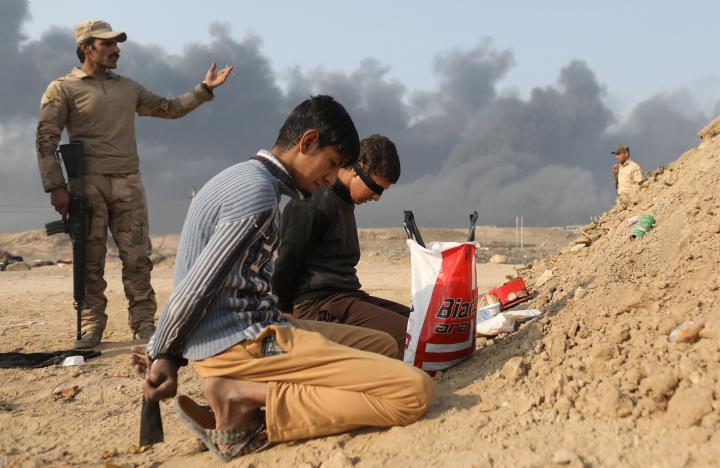 SOUTH OF MOSUL, IRAQ – The Iraqi army was trying on Thursday to reach a town south of Mosul where Islamic State has reportedly executed dozens to deter the population against any attempt to support the U.S.-led offensive on the jihadists' last major city stronghold in Iraq.
Eleven days into what is expected to be the biggest ground offensive in Iraq since the U.S.-led invasion of 2003, army and federal police units were fighting off sniper fire and suicide car bombs south of Hammam al-Alil, the site of the reported executions, an Iraqi military spokesman said. The militants shot dead dozens of prisoners there, most of them former members of the Iraqi police and army, taken from villages the group has been forced to abandon as the troops advanced, officials in the region said on Wednesday. The executions were meant "to terrorise the others, those who are in Mosul in particular", and also to get rid of the prisoners, said Abdul Rahman al-Waggaa, a member of the Nineveh provincial council. Some of the families of those executed are also held in Hammam al-Alil, he said. U.N. human rights spokesman Rupert Colville on Tuesday said Islamic State fighters had reportedly killed scores of people around Mosul in the last week. A Reuters correspondent met relatives of hostages south of Mosul. One of them was a police officer who had returned to see the family that he had left behind when his village fell under the militants' control two years ago. "I’m afraid they will keep pulling them back from village to village until they get to Mosul. And then they will disappear," he said, asking not be identified to protect family members still in the hands of the fighters. Reuters also spoke to a woman and an elderly man who were part of group of families forced to march two to three days to reach Mosul from the villages of Safiya and Ellezaga, about 30 km (nearly 20 miles) and 50 km (30 miles) to the south. Children and the elderly were released when they arrived in Mosul, on Tuesday, and told to stay with relatives, they said, speaking on the phone from one of the few places where there is still telephone coverage, on the city's edges. A resident of Mosul, Rayyan, said he saw the families when they arrived in the city, "their bare feet bleeding and covered with dust as if coming from under the rubble." "We cried when we saw them," he said. FIERCE DEFENCE Islamic State fighters are keeping up their fierce defence of the southern approaches to Mosul, which has held up Iraqi troops there and forced an elite army unit east of the city to put a more rapid advance on hold. The fall of Mosul would mark Islamic State's effective defeat in Iraq. The city is many times bigger than any other that the ultra-hardline militant group has ever captured, and it was from its Grand Mosque in 2014 that the group's leader, Abu Bakr al-Baghdadi, declared a "caliphate" that also spans parts of Syria. U.S. Defense Secretary Ash Carter said on Tuesday an attack on Raqqa, Islamic State's main stronghold in Syria, would start while the battle of Mosul is still unfolding. It was the first official suggestion that U.S.-backed forces in both countries could mount simultaneous operations to crush the caliphate. The front lines east and north of Mosul have moved much closer to the edges of the city than the southern front and the combat ahead is likely to get more deadly as 1.5 million residents remain in the city. Worst-case U.N. forecasts see up to a million people being uprooted. U.N. aid agencies said the fighting had so far forced about 16,000 people to flee. "Assessments have recorded a significant number of female-headed households, raising concerns around the detention or capture of men and boys," the office of the U.N. humanitarian coordinator for Iraq said on Wednesday. The coordinator, Lise Grande, told Reuters on Tuesday that a mass exodus could happen, maybe within the next few days. CHEMICAL WEAPONS It was also possible that Islamic State fighters could resort to "rudimentary chemical weapons" to hold back the impending assault, she said. The militants are suspected of setting on fire a sulphur plant south of Mosul last week, filling the air with toxic gasses that caused breathing problems for hundreds of civilians. A senior U.S. official said about 50,000 Iraqi ground troops are taking part in the offensive, including a core force of 30,000 from the government’s armed forces, 10,000 Kurdish fighters and the remaining 10,000 from police and local volunteers. About 5,000 to 6,000 jihadists are dug in, according to Iraqi military estimates. Roughly 5,000 U.S. troops are also in Iraq. More than 100 of them are embedded with Iraqi and Kurdish peshmerga forces advising commanders and helping coalition air power to hit targets. They are not deployed on front lines. The warring sides are not giving casualty figures in their own ranks or among civilians, each claiming to have killed hundreds of enemy fighters. The Iraqi army said it killed 772 insurgents since the start of the offensive on Oct. 17, and captured 23. About 100 towns, villages and hamlets were taken back, it added in a statement. –Reuters