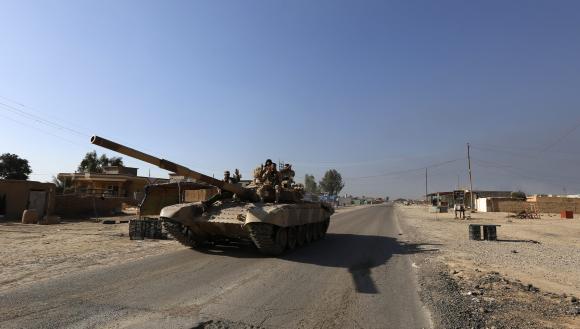 BAGHDAD - Iraqi security forces and militia fighters captured part of Tikrit's northern Qadisiya district on Wednesday in their first advance into the city seized nine months ago by Islamic State militants, security officials and the provincial governor said. The home city of executed former president Saddam Hussein, Tikrit is the focus of Baghdad's biggest counter-offensive to push back last year's Islamic State sweep through much of northern and central Iraq. More than 20,000 troops and Iranian-backed Shi'ite Muslim militias known as Hashid Shaabi, supported by local Sunni Muslim tribes, launched the offensive 10 days ago, seizing territory to the east and along the Tigris river to the north and south. On Tuesday they took the town of al-Alam on the northern edge of Tikrit, paving the way for an attack on the city itself. "The governor of Salahuddin announces the purging of half of Qadisiya district, the largest of Tikrit's neighborhoods," a statement from governor Raed al-Jubouri's office said. The army and militia fighters raised the national flag above a military hospital in the section of Qadisiya they had retaken from the militants, security officials said. Wednesday morning's offensive then stalled when advancing troops came under sniper fire and paused to defuse roadside bombs and booby-trapped buildings. To the west of the city, advancing forces were halted by a minefield on the outskirts of the city. To the south, the army and two military helicopters shelled Islamic State positions but no ground operation was taking place, the sources said. Security officials said on Tuesday that Islamic State fighters blew up a bridge over the Tigris, which could hinder a coordinated assault on the city from different directions. RAMADI ATTACKS If Iraq's Shi'ite-led government is able to retake Tikrit it would be the first city clawed back from the Sunni insurgents and would give it momentum in the next, pivotal stage of the campaign - to recapture Mosul, the largest city in the north. Mosul is the biggest city held by the ultra-radical Islamic State, who now rule a self-declared cross-border caliphate in Sunni regions of Syria and Iraq. Over the past few months Islamic State has gradually lost ground in Iraq to the army, Shi'ite militias and Kurdish peshmerga forces, backed by air strikes carried out by a US-led coalition of mainly Western and allied Arab states. The United States says Baghdad did not seek aerial backup from the coalition in the Tikrit campaign. Instead, support on the ground has come from neighboring Iran, Washington's longtime regional rival, which has sent an elite Revolutionary Guard commander to oversee part of the battle. In the western province of Anbar, suicide car bombers in seven vehicles attacked Iraqi army positions in the provincial capital Ramadi, about 90 km (55 miles) west of Baghdad, police and medical sources say. A total of five people were killed in the attacks, including two policemen, and 19 were wounded, a medical source said, stressing that the toll was only preliminary. One of the car bombs exploded near a bridge in the west of the city and damaged part of the bridge, a police source said. - Reuters