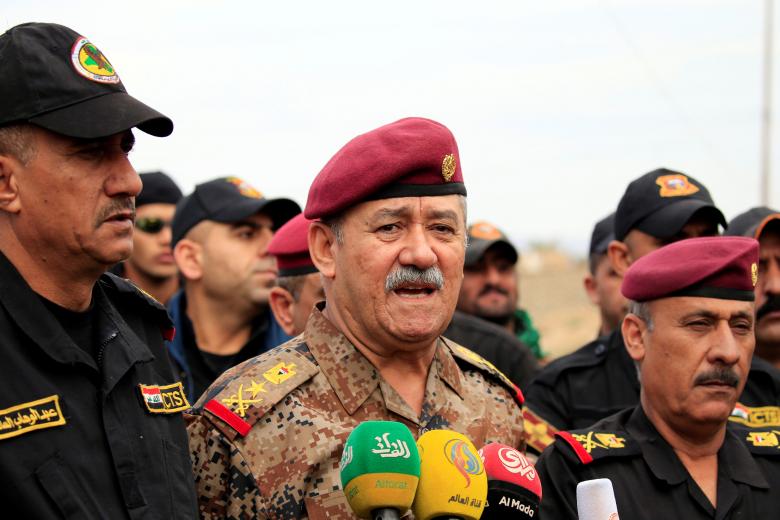 BAGHDAD/ERBIL - Iraqi special forces recaptured six districts of eastern Mosul on Friday, a military statement said, expanding the army's foothold in the Islamic State stronghold a day after its leader told his jihadist followers there could be no retreat. An officer in the elite Counter Terrorism Service said CTS troops had launched a major operation against the militants, who are now almost surrounded in their last major urban stronghold in Iraq. CTS special forces took over the neighbourhoods of Malayeen, Samah, Khadra, Karkukli, Quds and Karama, the statement said, inflicting heavy losses on the militant fighters and raising the Iraqi flag over buildings. One special forces officer told Reuters on Thursday the CTS units may try to push all the way to the Tigris river, which runs through the centre of Mosul. Iraqi television footage from the east of the city showed heavy palls of grey smoke rising into the sky. Iraqi regular troops and special forces, Shi'ite militias, Kurdish peshmerga fighters and other groups backed by U.S.-led air strikes launched a campaign nearly three weeks ago to retake Mosul. Winning back the city would crush the Iraqi half of a crossborder caliphate declared by Islamic State leader Abu Bakr al-Baghdadi from a Mosul mosque two years ago. Islamic State also holds large parts of neighbouring Syria, but Mosul is by far the largest city under control of the ultra-hardline militants in either country, and the campaign to retake it is the most complex in Iraq since the 2003 U.S.-led invasion which toppled Saddam Hussein and unleashed a decade of turmoil. In a rare speech released on Thursday Baghdadi - whose whereabouts are unknown - said there could be no retreat in a "total war" against the forces arrayed against Islamic State, telling fighters they must remain loyal to their commanders. URBAN WARFARE Mosul is still home to nearly 1.5 million people, who risk being caught up in brutal urban warfare. The United Nations has warned of a potential humanitarian crisis and a refugee exodus, although Iraqi officials say Islamic State is holding the civilian population as human shields. The United Nations says 21,000 people have been displaced since the start of the Mosul campaign. That figure excludes the thousands of people from outlying villages forced to head back into Mosul by retreating Islamic State fighters who used them as human shields. Mosul residents, speaking to Reuters by telephone, said Islamic State fighters were deploying artillery and rocket launchers in and near residential areas. Some were hidden in trees near the Wahda district in the south, while others were deployed on the rooftops of houses taken over by the militants in the Ghizlani district close to Mosul airport, they said. "We saw Daesh (Islamic State) fighters installing a heavy anti-aircraft machine gun alongside a rocket launchpad, and mortars as well," one Mosul resident said. People in the southern and eastern neighbourhoods reported on Thursday night that barrages of artillery shells and rockets being launched from their districts towards the advancing troops had shaken their houses. As well as the Islamic State resistance in Mosul itself, the militants have launched a series of diversionary attacks across the country since the start of the offensive. In the town of Shirqat, about 100 km (60 miles) south of Mosul, militants stormed a mosque and several houses early on Friday, a local police officer said, killing seven soldiers and fighters from the Shi'ite Popular Mobilisation force. The insurgents crossed from the eastern side of the Tigris river into the town at 3 a.m., taking over al-Baaja mosque and spreading out into alleyways. Security forces declared a curfew and said reinforcements from the Popular Mobilisation, or Hashid Shaabi, forces were being sent to the town. Iraqi troops and Kurdish peshmerga fighters have closed in on Mosul from the north, from the eastern Nineveh plains and up the River Tigris from the south. The Hashid Shaabi forces of mainly Shi'ite militias joined the campaign on Saturday, launching an offensive to cut off any supply or escape to the west. A Hashid spokesman said they had made progress but had not completely closed off the western flank, and their fighters had seen some cars leaving Mosul on Thursday. -Reuters