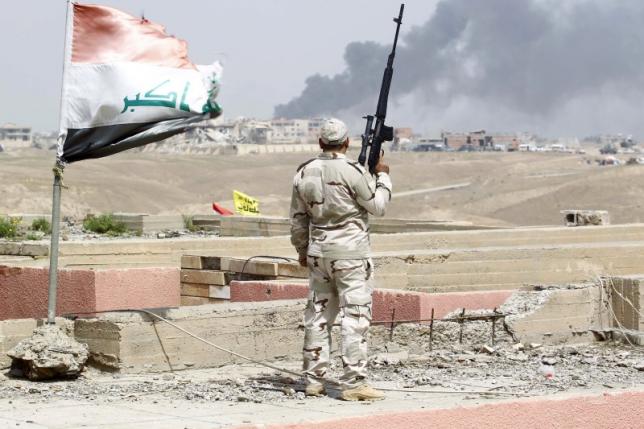 TIKRIT - Iraqi security forces and Shi'ite paramilitary fighters pushed deeper into the Sunni city of Tikrit on Tuesday, grabbing control of the governor's headquarters and the main hospital which had been occupied by Islamic State. Federal police and militias passed houses scarred by holes from bullets, mortars and rockets in southern Tikrit, according to Reuters' journalists traveling with the police. Five or six corpses lay in the street, bodies of Islamic State militants, the security forces said. Federal police worried that the corpses could be rigged with explosives. The officers said they now controlled the governor's compound and Tikrit hospital and were pushing forward towards the sprawling six square km (2.3 sq mile) presidential complex. Jassim al-Jbara, head of Salahuddin provincial council's security committee, said 40 percent of the city had been retaken. The advance on Tuesday saw Shi'ite militia groups return to battle after they had frozen their operations last Thursday when US-led air strikes were requested by Prime Minister Haidar al-Abadi. The Iranian-backed Shi'ite armed factions had opposed US-led strikes, insisting that their paramilitary groups could retake Tikrit, a Sunni city seized last June by Islamic State militants as they raced across northern Iraq. But the month-long fight for the home town of late dictator Saddam Hussein has inflicted heavy casualties on the Shi'ite paramilitary forces. Islamic State militants had built a network of bunkers and tunnels, rigged the city with explosives and deployed snipers against the advancing forces. Anti-American groups Kata'ib Hezbollah and Asaib Ahl al-Haq said they had joined federal police and army forces in going deeper into the city on Tuesday after Abadi, a moderate Shi'ite Islamist who became prime minister last year, agreed to halt US air strikes. They said air strikes in the city on Tuesday were being carried out only by the Iraqi military. A federal police officer made a similar claim. But the prime minister's office said no order had been issued; neither were US officials aware of any such military freeze. The US government, which deeply mistrusts the pro-Iranian Shi'ite militias, has sought ways to participate in the Tikrit battle without acknowledging working with forces backed by Tehran. US officials have insisted on an Iraqi government military command for the fight, even as Shi'ite militia forces remain the strongest presence on the ground. - Reuters