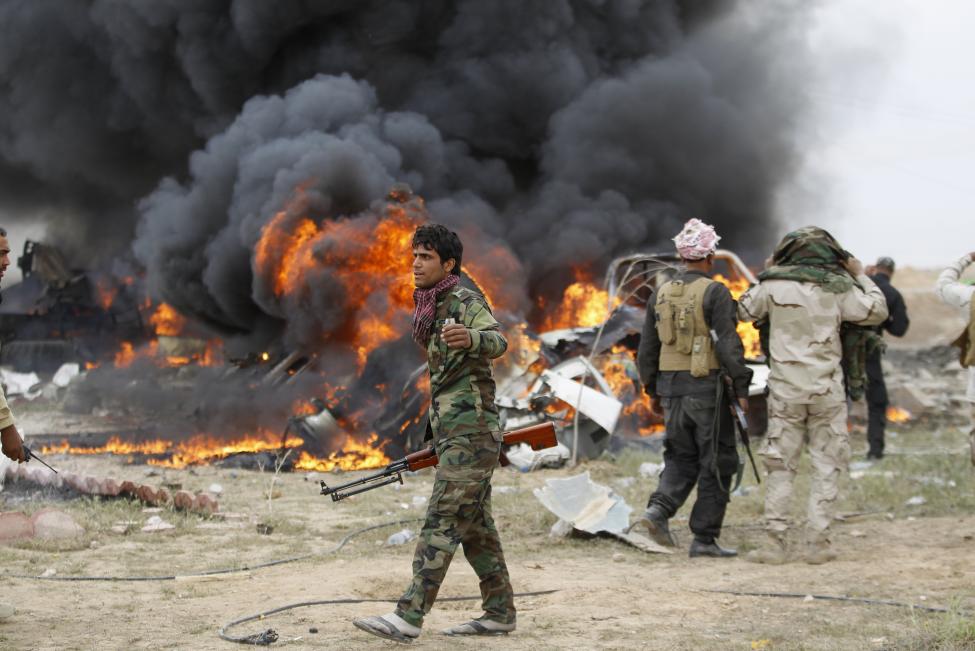 BAGHDAD - Iraqi security forces and mainly Shi'ite militia fought Islamic State fighters in Tikrit on Thursday, a day after they pushed into Saddam Hussein's home city in their biggest offensive yet against the militants. A source at the military command said there was heavy mortar shelling, sniper and machine-gun fire in the industrial quarter in the northwest of the city. Three Islamic State insurgents were killed but the army and militias struggled to advance from parts of the city which they took 24 hours earlier. Islamic State fighters stormed into Tikrit last June during a lightning offensive that was halted just outside Baghdad. They have since used the complex of palaces built in Tikrit under Saddam, the executed former president, as their headquarters. The military source said the insurgents still held the presidential complex and at least three other districts in the center of Tikrit, holding up further army advances with snipers and bombs. A Reuters photographer saw one car bomb explode on the western edge of the city, and security officials said Islamic State fighters had booby-trapped abandoned buildings. Defence Minister Khaled al-Obeidi said on a visit to the frontline on Thursday that operations were going to plan, despite the lack of apparent progress on Thursday while the combined army and militia forces consolidated their positions. "Now the second page of the battle commences," he told state television Iraqiya. "All the branches of the security forces are engaged in the battle as well as tribal fighters and the Hashid Shaabi (Popular Mobilisation)," he said, referring to the militia forces. If Iraq's Shi'ite-led government retakes Tikrit it would be the first city clawed back from the Sunni insurgents and would give it momentum in the next, pivotal stage of the campaign to recapture Mosul, the largest city in the north. Mosul is also the biggest city held by the ultra-radical Islamic State, who now rule a self-declared cross-border caliphate in Sunni regions of Syria and Iraq. BLOWN-UP BRIDGE More than 20,000 Iraqi troops and Iranian-backed Shi'ite Muslim militias, supported by local Sunni Muslim tribes, launched the offensive for Tikrit 10 days ago, advancing from the east and along the banks of the Tigris. On Tuesday they took the town of al-Alam on the northern edge of Tikrit, paving the way for an attack on the city itself. North of Tikrit, the militants blew up al-Fatha bridge linking the north-south highway along the Tigris river with the Islamic State-held town of Hawijah to the north-east. They erected barricades and gathered 20 vehicles by the blown up bridge, an official at the Salahuddin province operations command said. The insurgents have also fought back elsewhere in Iraq, launching 13 suicide car bombs against army positions on Wednesday in Ramadi, about 90 km (55 miles) west of Baghdad. On Wednesday night they captured a bridge over the Euphrates river in Ramadi and attacked an army position with two booby-trapped armored vehicles, a member of a local Sunni tribal movement said. At least 22 Iraqi soldiers were killed in a blast in Anbar on Wednesday, Iraqi security sources said. An Iraqi military officer blamed the explosion on an air strike carried out by U.S.-led coalition forces, but a U.S. official said the only coalition attack was miles from the site of the blast. In the north, Kurdish Peshmerga forces captured Mariam Pek, Kubaiba and al-Murra villages, between 25-30 km (15-20 miles) south of Kirkuk, from Islamic State after heavy clashes that erupted early on Thursday, Peshmerga sources said. - Reuters