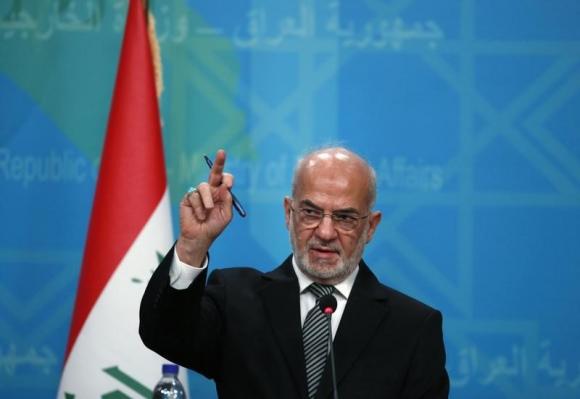 CAIRO - Iraq's foreign minister dismissed Saudi concerns that Iran was taking control of his country and he said Baghdad sought good relations with both regional powers. Sunni Muslim powerhouse Saudi Arabia, the main regional rival of Shi'ite Iran, fears Tehran's growing influence in Iraq, whose government is Shi'ite-led. Riyadh is also concerned that Iran will gain from any nuclear deal it manages to clinch in its ongoing negotiations with the West. "Iran has supported Iraq but did not send armies to Iraq and did not interfere in Iraq's sovereignty", Foreign Minister Ibrahim al-Jaafari told Reuters in an interview in Cairo late on Tuesday after attending an Arab League meeting. "We want relations with Saudi Arabia and with Iran ... Our openness to Saudi Arabia does not mean our relations with other countries will flag ... and this does not mean Iraq is becoming Persian." Powerful Iranian-backed militias have taken charge of the battle against Islamic State militants in Iraq since the Iraqi army deserted en masse last summer. Iran has recently sent an elite Revolutionary Guard commander to oversee part of the battle in Tikrit north of Baghdad. "The situation in Tikrit is a prime example of what we are worried about. Iran is taking over the country," Saudi Foreign Minister Prince Saud al-Faisal told a news conference last week. Asked about those comments, Jaafari said the fighting in Tikrit was the result of Iraqi efforts, adding: "It's no secret there are countries supporting us". Iraqi officials say Iran helped organize Shi'ite volunteers and militia forces last year after Grand Ayatollah Sistani appealed to Iraqis to defend their country following big territorial advances by Islamic State. However, the officials put the number of Iranian advisers in Iraq in the hundreds, far fewer than the 3,000 US officers training Iraqi troops. US and coalition forces are also conducting air strikes against Islamic State fighters in Iraq. Saudi Arabia has also expressed concern about Iran's growing influence in Yemen, where it has supplied weapons, money and training to the Shi'ite Houthi militia, according to Yemeni and Iranian officials. Jaafari sought to highlight evidence of improving Iraqi-Saudi relations. "We have cooperated to define a building for the Saudi embassy in Baghdad ... and we welcomed a delegation from the Saudi foreign ministry," he said. Saudi Arabia cut ties with Iraq after then-dictator Saddam Hussein invaded Kuwait in 1990. Earlier this year, Saudi Arabia's late King Abdullah ordered missions to be opened in Baghdad and Arbil, capital of Iraq's Kurdish region. - Reuters