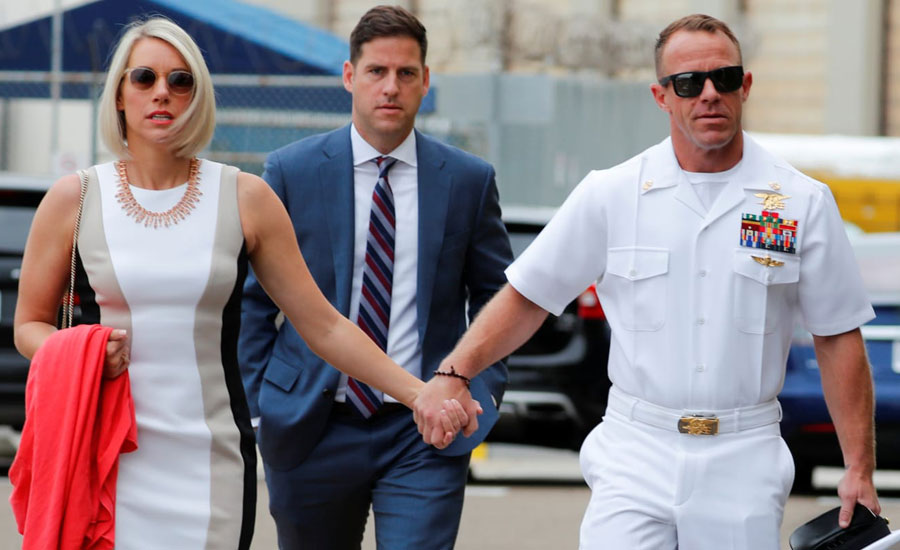 SAN DIEGO (Reuters) - An Iraqi general testifying for the defence in the murder trial of US Navy SEAL Edward Gallagher said he never saw the platoon leader mistreat a wounded detainee before he died, contradicting prosecutors’ central charge that Gallagher fatally stabbed the prisoner in the neck.
A sworn deposition of Major General Abbas al-Jubouri taped in San Diego earlier this month was played on Thursday for the jury in a court-martial that has drawn attention from US President Donald Trump, who intervened months ago to ease the conditions of Gallagher’s pre-trial confinement. Contrary to prior testimony that Gallagher or a medic in his team had acted deliberately to cause the death of a helpless Islamic State fighter in their custody, al-Jubouri said the Navy SEALs did all they could to save the teenager’s life. “They support him. They did their best to get him to survive,” al-Jubouri testified in broken English, saying he remained with the detainee at U.S. outpost until he had died. Gallagher, a decorated career combat veteran is charged with committing premeditated murder of the Iraqi prisoner brought to his unit for medical treatment by repeatedly stabbing the youth in the neck with a custom-made knife. He also is charged with attempted murder in the wounding of two civilians - a school girl and an elderly man - shot from a sniper’s perch, as well as with obstruction of justice and other offences. If convicted, Gallagher could face life in prison. Gallagher has denied all charges and says he is wrongly accused. The thrust of his defence has been that fellow SEAL team members testifying against him, several under grants of immunity, are disgruntled subordinates fabricating the allegations to force him from the Navy. The Navy opened its investigation in September 2018, about a year after Gallagher and his platoon had returned from Iraq. Trump ordered Gallagher moved from pre-trial detention in a military brig to confinement at a Navy base, and the Navy judge released him from custody in late May in a rebuke to prosecutors for conduct the judge said infringed on Gallagher’s right to a fair trial. In another setback to the prosecution’s case last week, a Navy SEAL medic testifying for prosecutors asserted it was he, not Gallagher, who caused the death of the Iraqi detainee by blocking the youth’s breathing tube in what he described as a mercy killing. Several SEAL team members testified they saw Gallagher deliver what appeared to be fatal stab wounds to the prisoner’s neck, and prosecutors accused the medic of changing his story on the witness stand. The Iraqi general said in his videotaped deposition that he was with the detainee during the entire 20 minutes he spent alive at the U.S. outpost, and that the prisoner appeared to have succumbed to his combat wounds. “This person was at the last moment of life,” al-Jubouri testified. Asked under cross-examination if he saw Gallagher mistreat the prisoner, the general replied, “Any mistake, I would stop him. I would be very upset.” According to previous testimony, the detainee had suffered a gunshot wound to his leg and blast damage to his lungs. In his deposition, al-Jubouri said the detainee told him during the two-hour drive from the battlefield that he was 17 years old. Closing arguments in the case were expected to begin next week.