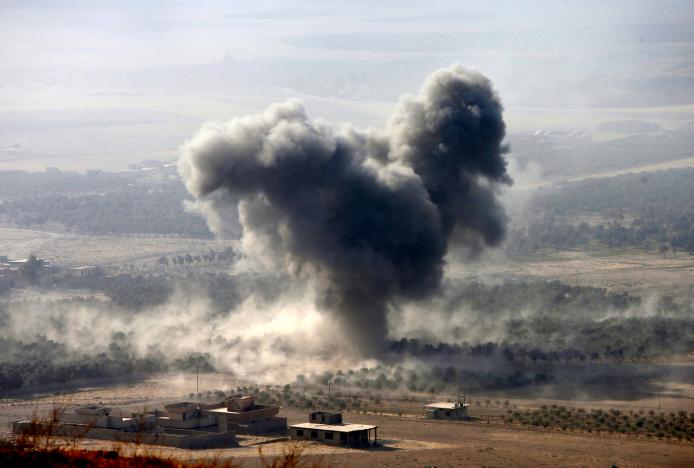 ERBIL - Kurdish fighters said they had taken the town of Bashiqa near Mosul from Islamic State on Sunday as coalition forces pressed their offensive against the militants' last stronghold in Iraq. An American official said Masoud Barzani, President of the Iraqi Kurdish region, had told US Defense Secretary Ash Carter that the Kurds had succeeded in liberating Bashiqa from Islamic State. Kurdish Peshmerga fighters told reporters at the scene that they had entered Bashiqa. Journalists were not being allowed into the town, which lies 12 km (8 miles) to the northeast of Mosul. Its capture, if confirmed, would mark the removal of one more obstacle on the road to the northern Iraqi city. Reuters television footage from Nawran, a town near Bashiqa, showed Kurdish fighters using a heavy mortar, a machine gun and small arms as smoke rose over the area around Bashiqa. As Kurdish Peshmerga forces moved though the area, armoured vehicles moved along a road and a helicopter flew overhead. The Peshmerga are also using tanks, rocket launchers and snipers. A Reuters photographer saw the fighters destroy at least three suicide car bombs dispatched against their forces. The offensive that started on Monday to capture Mosul is backed by a US-led coalition. It is expected to become the biggest battle in Iraq since the US-led invasion in 2003. Coalition forces have advanced to within 5 km (3 miles) of Mosul at the closest point, the interior minister of the Kurdish regional government has said. An Iraqi force of about 30,000, joined by US special forces and under American, French and British air cover, is ready to push into Mosul after recapturing Falluja and Ramadi, west of Baghdad, and seizing the Sunni stronghold of Tikrit in central Iraq. Islamic State have staged attacks apparently aimed at distracting the advancing forces. They hit the city of Kirkuk on Friday and on Sunday they attacked Rutba, a town 360 km (225 miles) west of Baghdad, where they killed at least seven policemen, according to a police source. The mayor, Imad al-Dulaimi, said the insurgents attacked during the night and gained entry to the town by coordinating with sleeper cells there. About 30 insurgents skirmished with tribal fighters and security forces before vanishing. EXPLOSIVES In an attempt to repel the offensive against Mosul, Islamic State also set fire to a sulphur plant near the city. Up to 1,000 people were treated in hospital after inhaling toxic fumes. Coalition officials have said the offensive is going well, but that it will take a long time to recapture Mosul, which has a civilian population of 1.5 million. Between 4,000 and 8,000 Islamic State fighters have rigged the city with explosives, built oil-filled moats, dug tunnels, and trenches and are feared to be ready to use civilians as human shields. Carter sounded optimistic about the campaign to take Mosul during a trip to Erbil as he praised the Kurdish region's Peshmerga fighters. "I’m here to commend you and your forces. I’m encouraged by what I see," Carter told Barzani during talks. Peshmerga spokesman Brigadier General Halgord Hekmet told reporters that 25 Kurdish forces had been killed so far. Carter lamented Kurdish casualties but extolled the region's forces as "exceptionally capable and essential". During the meeting, Barzani said the Mosul operation had started successfully and cited good progress over the past three days. He thanked the United States and the coalition for their support. "I know you're going back to the front now. Please be safe. We appreciate your friendship," Carter told Barzani as he departed. In Rome, Pope Francis said he was close to the Iraqi people and in particular to the citizens of Mosul. "Our souls are shaken by the brutal acts of violence that for too long have been carried out against innocent citizens, be they Muslim, Christian or from other ethnic and religious groups." He had been saddened by reports that numerous people, including many children, had been "killed in cold blood". -Reuters