KARACHI (92 News) – Major General Ahmed Jasim Maarij, Commander Iraqi Naval forces, accompanied by his personal staff, is on an official visit to Pakistan. Upon his arrival at Naval Headquarters, the dignitary was received by Chief of the Naval Staff Admiral Muhammad Zakaullah. A smartly turned out contingent of Pakistan Navy clad in ceremonial dress presented him the guard of honor. Admiral Muhammad Zakaullah, then introduced the visiting dignitary to the Principal Staff Officers at Naval Headquarters. Later, Major General Ahmed Jasim Maarig called on Chief of the Naval Staff in his office, where he held detailed discussions on professional matters with his counterpart. A comprehensive brief on PN’s operational developments was also given to the visiting dignitary. Major General Ahmed Jasim Maarij also called on Defence Minister and Chairman Joint Chiefs of Staff Committee during his engagements at Islamabad. 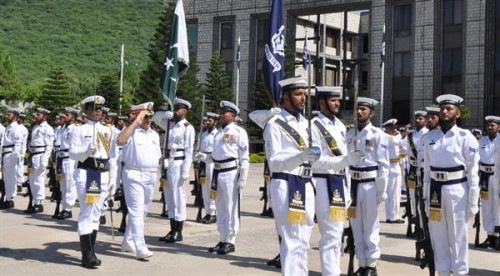 In the second leg of his visit, Commander Iraqi Navy is scheduled to meet Naval Field Commands at Karachi and Lahore and will also visit PN War College Lahore and PN Fleet/Units at Karachi. The Iraqi Naval Chief will also lay wreaths at mausoleums of Allama Iqbal and Quaid-e-Azam. Major General Ahmed Jasim Maarij besides command the Iraqi Navy, has had the privilege to hold a number of Command and Staff appointments including Director MoD, Base Commander Umm Qaser and Director Operation Iraqi Navy & Coastal Defence. Major General Ahmed Jasim Maarij is a graduate of Iraqi Staff College. The visit is expected to greatly enhance the bilateral cooperation between the two Navies.