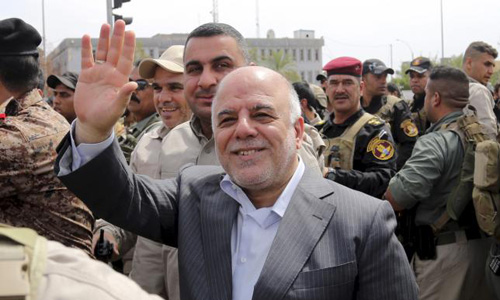 BERLIN - Iraqi Prime Minister Haidar al-Abadi told a German magazine that armies in the region around Iraq had no chance of defeating Islamic State (IS) if the militants continued to recruit ideologically indoctrinated foreign fighters. In an interview with Der Spiegel published on Saturday, Abadi said that around 57 percent of IS fighters were Iraqis but they did not cause any problems as they simply ran away when Iraqi troops entered towns. "It is the 43 percent who are foreign fighters who have been indoctrinated ideologically who have their backs up against the wall. If Daesh continues to recruit so many from other countries, then no army in our region can stand up to it." Daesh is an Arabic name for Islamic State. Abadi said government security authorities needed to take action to protect young people from IS "in the same way they trace child pornography networks around the world". Abadi said Germany could play a key role in supporting the fight against IS as it had weapons that Iraq requires, particularly anti-explosive devices. He said Berlin should help given that hundreds of Germans were fighting for IS. German security services say about 600 German residents have joined militant groups in Syria and Iraq. Abadi said cooperation with Germany's foreign intelligence service was very good and Iraq was providing it with the phone numbers that Germans fighting for IS use to call Germany. Abadi said the liberation of the city of Tikrit from IS on April 1 was encouraging but he added that IS was still a major threat: "They keep on recruiting people, they have huge financial resources and, honestly, a uniformed army alone cannot face it on its own." - REUTERS