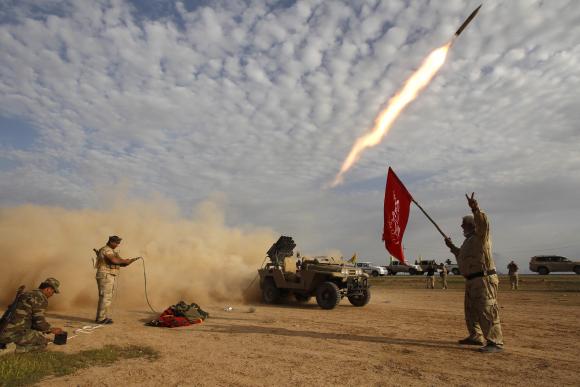 BAGHDAD - Iraqi security forces and Shi'ite militia took the center of a town on the northern edge of Tikrit from Islamic State on Tuesday as they closed in on Saddam Hussein's home city. Al-Alam is the last Islamic State stronghold that needs to be cleared before government forces and militiamen can enter the city of Tikrit itself, which has been under militant control since last summer. Military commanders said Islamic State militants were still holding out in houses in the northern section of al-Alam, but the army and mainly Shi'ite militia had retaken the town center and were preparing for street fighting to seize the rest. "Snipers and booby traps are slowing our advance to completely control all parts of the town," said army captain Wisam Ibrahim, speaking from al-Alam. "We're waiting for the army helicopters to secure the way for a smooth advance for the troops," he said. The battle for Tikrit its aftermath will inform any plans to move further north and recapture Mosul, the largest city under Islamic State rule. The campaign to retake Tikrit, which began one week ago, is the biggest since Islamic State swept across the north last year, and the government hopes it will reverse the militants' momentum. Islamic State has sent reinforcements to Tikrit from other parts of its self-proclaimed caliphate further north, where it came under attack on Monday from Kurdish forces around the oil-rich-city of Kirkuk. –Reuters