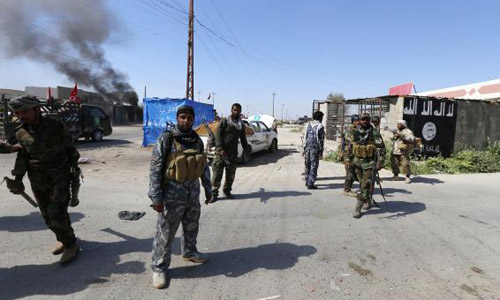 AL-ALAM – Iraqi troops and militias drove Islamic State insurgents out of the town of al-Alam on Tuesday, clearing a final hurdle before a planned assault on Saddam Hussein's home city of Tikrit in their biggest offensive yet against the ultra-radical group. The power base of executed former president Saddam's clan, Tikrit is the focus of a counter-offensive against Islamic State by more than 20,000 troops and Shi'ite Muslim militias known as Hashid Shaabi, backed by local Sunni Muslim tribes. If Iraq's Shi'ite-led government is able to retake Tikrit it would be the first city clawed back from the Sunni insurgents and would give it momentum in the next, pivotal stage of the campaign - to recapture Mosul, the largest city in the north. A Reuters photographer saw dozens of families, who earlier fled al-Alam to escape Islamic State rule, return to the town, celebrating and slaughtering sheep for the victorious forces. "I announce officially that the town is under the total control of security forces, the Hashid Shaabi (Popular Mobilization) units and local tribal fighters," said local mayor Laith al-Jubouri. "We rejoice in this victory and we want al-Alam to be the launchpad for the liberation of Tikrit and Mosul," he told Reuters by telephone. Mosul in the far north is the largest city held by the ultra-radical Islamic State, who now rule a self-declared cross-border caliphate in Sunni regions of Syria and Iraq. But the ultra-radical group over the past few months has gradually lost ground in Iraq to the army, Shi'ite militias and Kurdish peshmerga forces, backed by air strikes carried out by a U.S.-led coalition of mainly Western and allied Arab states. The United States says Baghdad did not seek aerial backup from the coalition in the Tikrit campaign. Instead, support on the ground has come from neighboring Iran, Washington's longtime regional rival, which backs the Shi'ite militias and has sent an elite Revolutionary Guard commander to oversee part of the battle. READY FOR TIKRIT The Iraqi army and militias now control the two towns to the north and south of Tikrit along the Tigris river and appear ready to move on the city itself. Security officials said the assault could start as early as Wednesday, although the 10-day campaign has so far been marked by gradual and steady advances rather than rapid attacks. Security officials said Islamic State fighters blew up a bridge over the Tigris on Tuesday, aiming to hinder any advance. Both al-Dour and al-Alam lie on the east bank of the river, opposite Tikrit. But the army has a large military base on the same western side from which it could send forces into Tikrit. Hundreds of Shi'ite army recruits who abandoned the Speicher military base last June were shot dead in one of the biggest mass killings carried out by Islamic State fighters. There have been fears that the Shi'ite-dominated security forces and militia would seek revenge on local Sunni residents for the Speicher killings. In the nearby village of Albu Ajil, local officials said houses had been set on fire by the militia. Some houses were also set alight in al-Alam, but local tribal fighters said they belonged to security force members and government workers and were burnt by the retreating insurgents. A local official said security forces and militias had regained control over the Ajil oilfield northeast of al-Alam, but other sources said the situation was still unclear. Black smoke columns could still be seen rising from the area and Jubouri, the al-Alam mayor, said Islamic State fighters set ablaze at least 10 wells in the oilfield. He could not confirm it was completely under the control of security forces. An Interior Ministry source said two of the ministry's armored vehicles were hit by Islamic State missiles or rockets north of al-Alam, and heavy clashes were taking place. He did not give details of casualties. The Reuters photographer inside al-Alam saw two destroyed Islamic State vehicles, which had been targeted by army helicopters on Tuesday, with charred bodies still inside. Islamic State has sent reinforcements to Tikrit from other parts of its "caliphate" further north, where it came under attack on Monday from Kurdish forces around the oil-rich-city of Kirkuk. A Kurdish commander said his forces would press on with their offensive and had captured another village on Tuesday. They had stopped in an area called Kwas, but would resume in coming days, Major General Omar Hassan said. – Reuters