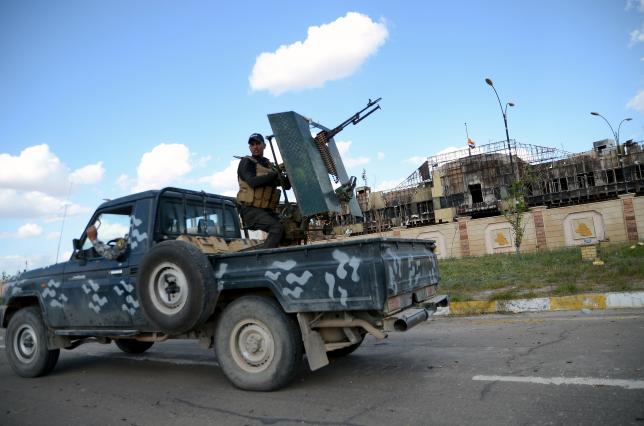 TIKRIT - Iraqi troops and Shi'ite paramilitary fighters were battling Islamic State on Wednesday in northern Tikrit, which officials described as the Sunni Muslim militant group's last stronghold in the city. With officials touting victory in a month-long battle, state television said Prime Minister Haidar al-Abadi was visiting the city, which the Islamist militants captured last June as they seized most of Iraq's Sunni territories. Security forces were fighting to clear the last Islamic State stronghold, the northern neighborhood of Qadissiyah, Interior Minister Mohammed al-Ghabban told reporters in the city. "Most of Tikrit today is liberated, only small parts remain (outside our control). We will give you the good news in the next few hours after eliminating the pockets that are still in the city," Ghabban said. The city's streets were completely abandoned, and buildings scarred by gunfire. Iranian-backed Shi'ite militia groups had returned to the battle on Tuesday after suspending their operations last Thursday, when Abadi requested US-led air strikes. The militias had opposed US-led strikes, insisting that they could retake the city. The US government, which deeply mistrusts the Shi'ite militias, has sought ways to participate in the Tikrit battle without acknowledging working with forces backed by Tehran. US officials insisted on an Iraqi government military command for the battle, even though the Shi'ite militia forces were the largest presence on the ground. - Reuters