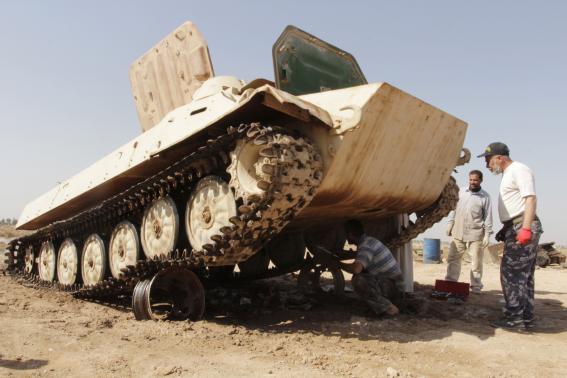 AL-HARTHA, IRAQ (Reuters) - In a military scrapyard in the southern Iraqi desert, abandoned army equipment sat for years waiting to be melted down to steel bars. Now, thanks to new conflict and a resourceful old mechanic, some of the rusty warhorses have won a reprieve. Last June's stunning offensive by Islamic State militants who control much of northern and western Iraq left the army in disarray and much of its US-supplied equipment was taken over by the advancing radical Sunni Muslim fighters. Baghdad's Shi'ite-led government appealed for reinforcements from across the world to help it fight back. But for retired military mechanic Madhi al-Sukaini, the answer lay nearer to home. "The scrap yard where thousands of bits of army equipment are dumped is close to where I live and it was a constant reminder of the long war with Iran," Sukaini said, referring to the relics from the 1980-88 conflict. The scrap yard also contains guns, vehicles and tanks - some of them identifiable only by barrels still poking through the sand - from Iraq's 1990-91 occupation and defeat in Kuwait and from the 2003 US-led invasion to overthrow Saddam Hussein. "One time I passed by and an idea flashed in my mind: Why don’t I repair some of the dumped armored vehicles to help in the war against Daesh?" he said, referring to the Islamic State by its Arabic acronym. So the 65-year-old veteran of Saddam's army set to work with his sons to restore some of the old vehicles and supply them to Shi'ite militias now fighting to push Islamic State out of the late dictator's home city of Tikrit, north of Baghdad. FROM SCRAPHEAP TO FRONTLINE "The idea came to me after I heard from the frontlines in Tikrit and Samarra that many fighters from Hashid Shaabi were killed in battles due to a lack of armored vehicles," said Sukaini, standing in front of his workshop in al-Hartha, about 10 km (6 miles) from Basra. The Hashid Shaabi (Popular Mobilization) units of mainly Shi'ite militia fighters have led the counter-offensive against Islamic State. Fighting alongside the army, many of them go into battle with whatever arms and equipment they can muster - much of it supplied by Shi'ite Iran. Behind Sukaini the sound of steel hammering on armor tracks rang out as metal workers performed surgery on a rusty army personnel carrier dating back to the Iran-Iraq war. His son Haitham, 31, head of the repairs team, said Sukaini's years of experience meant they were able not just to restore the army equipment, but add their own improvements. "We managed to turn an armored personnel carrier into an assault vehicle by installing a 23-mm machine gun on top with armor to protect the gunner. It's ready to be used on the frontline near Tikrit," Haitham said before jumping into another of his vehicles, a Russian-made BTR armored transporter. After taking it on several circuits of a dusty yard near the workshop, Haitham drove it over a steep sand barrier to prove it could handle rough terrain, throwing a thumbs-up when it successfully - if a little shakily - made it over. The repair crew had hung a banner over it with the name of Shi'ite Islam's revered Imam Hussein and printed the name “Duldul” on its metal frame, after the horse that Shi’ite commander al-Mukhtar rode when he avenged Hussein's death. The next day, the vehicle was sent north to a position near the city of Samarra where the Ali al-Akbar brigade, one of the Shi'ite militia, is operating. The team are currently working on three more vehicles. "I’m proud to see this great work. Our fighters ... desperately need such armored vehicles to stay safe from the enemy’s snipers and mortar attacks in the battle against Daesh,” said Ali Hummadi of the Ali al-Akbar brigade, which is fighting in Samarra and Tikrit.