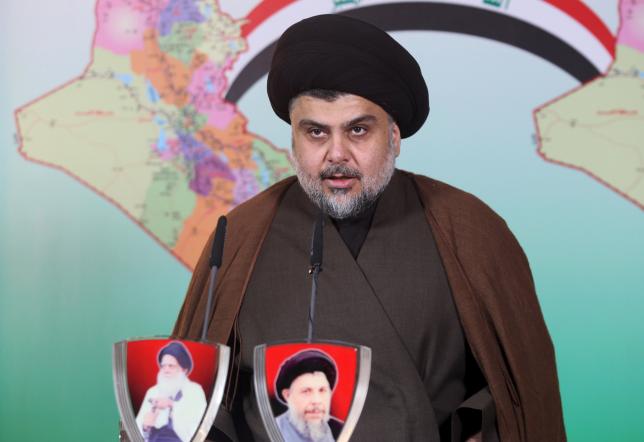 The remarks by Sadr, whose Al-Ahrar bloc holds 34 seats in parliament and three cabinet posts, were the first high-level reaction to the premier's call for politically appointed ministers to be replaced with technocrats.

Struggling to show results from reforms he announced six months ago, Abadi said this week he wanted to make the replacements in a cabinet reshuffle, a shake-up that would alter the delicate balance of government in place since the U.S.-led invasion in 2003.

Abadi provided few details of the planned reshuffle but he is expected to move forward with changes this week after returning to Iraq from a European trip.

Sadr called for "forming a technocrat government away from partisanship that should include all."

He added that withdrawing from politics would become "a duty" if the government did not make swift progress to implement reforms such as purging the judiciary and curbing corruption. "There is no room for slacking off," he said in a televised address.

Sadr's opinion holds sway over tens of thousands of supporters, including fighters who once controlled parts of Baghdad and helped defend the capital after Islamic State swept across the Syrian border in June 2014.

A few hundred followers gathered in central Baghdad following his speech to show their support.

Corruption and mismanagement in Iraq's political system have made the country nearly impossible to govern and undermined the fight against Islamic State militants controlling swathes of territory in the north and west.

Public demonstrations and calls by another prominent Shi'ite cleric last summer spurred Abadi to start dismantling the country's patronage system and root out corruption. Sadr endorsed those reforms at the time.

Abadi's drive, however, got bogged down by legal challenges and opposition from sectors resisting change. He has since been criticized for failing to take decisive action.

The proposed reshuffle is expected to face resistance from major political blocs and could end up costing Abadi his job, politicians and diplomats say. –Reuters