A new-look Ireland side put in a confident performance in cruising to a 4-wicket win over Scotland in the T20I Tri-Series at Malahide Cricket Club today.

The opening pair of Coetzer and George Munsey were looking to follow up there double-hundred stand against Netherlands yesterday, but on 10 it was Coetzer who fell first, clean bowled by Boyd Rankin. Rankin claimed 3-29 from his four overs, and led the attack with a display of line and length that the Scots found difficult to get away.

And there goes @GeorgeMunsey - out for 34, Scotland now 50-2 in the 5th over. #BackingGreen ☘️🏏 pic.twitter.com/ZqxpIXdlvE

Leg-spinner Gareth Delany acquitted himself well despite the Scottish batsmen looking to score quickly, and finished with 2-31, including a diving caught and bowled dismissal late on.

Calum MacLeod top scored for the visitors with a rapid 72 from 42 balls but on a ground that saw Scotland post 252 yesterday, their total of 193/7 always looked under-par.

In response, Ireland’s openers Kevin O’Brien (17 from 9 balls) and Gareth Delany (52 from 28 balls) posted an opening stand of 57 from just 25 balls. Delany went on to hit his maiden international half-century in only his third T20I. 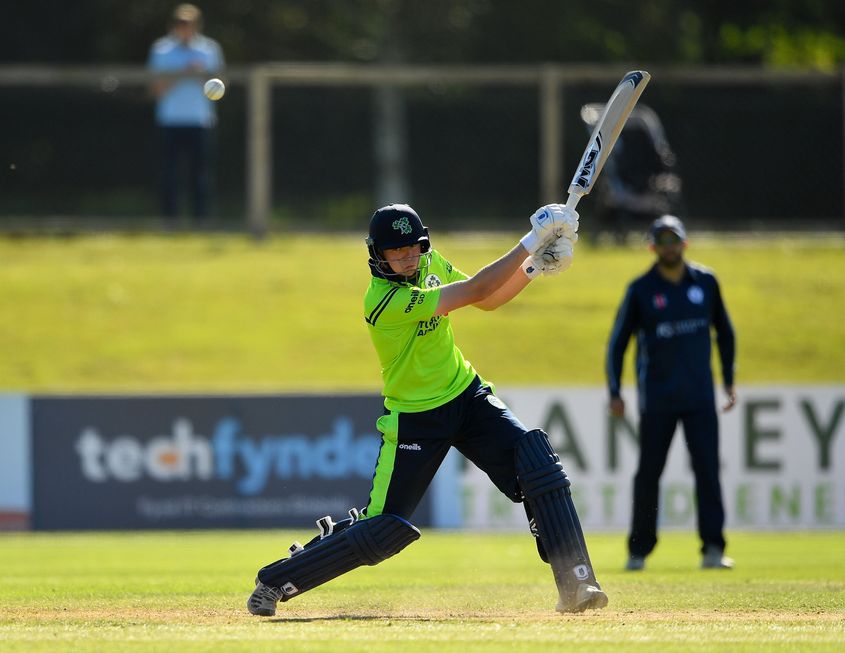 Andy Balbirnie continued to pile on the runs, with a big-hitting 64 from 32 balls, an innings that included three maximums, and despite a few late wickets the Irish side cruised to victory with 14 balls to spare – Mark Adair smashing the last ball to the long-off boundary to complete the run chase.

Ireland lead the table at the halfway mark. The next match in the T20I Tri-Series is between Ireland and Netherlands tomorrow at 1.30pm, with a livestream broadcast available via Cricket Ireland’s Youtube channel.