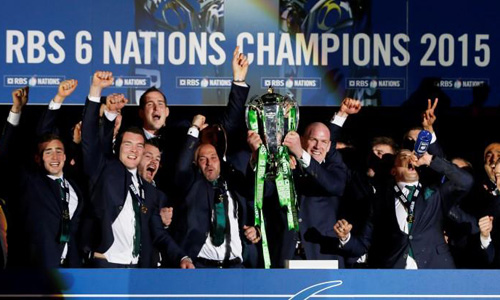 LONDON (Reuters) - Ireland won the Six Nations Championship on points difference after beating Scotland 40-10 at Murrayfield on Saturday as comprehensive victories for England and Wales proved in vain. Wales humbled Italy 61-20 to lay down a marker but Ireland's victory lifted them top of the standings and left England needing to beat France by 26 points to win the title. England did prevail 55-35 in an extraordinary game at Twickenham but it was not enough to deny Ireland a second successive crown. "It feels incredible," Ireland captain Paul O'Connell told Irish television station RTE. "It's such bizarre circumstances as well. It's an amazing feeling to do it two years in a row, I think for the first time in 65 years. It's brilliant for Irish rugby. Brilliant." Wales began a remarkable day with a sensational second-half display in Italy during which they scored seven tries to win 61-20 and surge to the top of the standings. In Edinburgh, though, Ireland forwards O'Connell and Sean O'Brien scored early tries to put Ireland 17-3 ahead before Scotland flyhalf Finn Russell scampered over in the left corner to reduce the deficit to 20-10 at halftime. Ireland dominated possession and were rewarded when centre Jared Payne scythed through the Scottish defence to touch down and Scotland were on the ropes when prop Geoff Cross was sent to the sin-bin. But Jonny Sexton missed two straightforward penalties before extending the Irish lead to 33-10 and O'Brien burrowed over from close range seven minutes from time. Earlier in Rome, Wales spluttered through the first half and led only 14-13 at the interval against a determined Italian side. But the Welsh produced a scintillating display of attacking rugby as winger George North crossed the line three times and Liam Williams, Rhys Webb, Sam Warburton and Scott Williams also went over to put Wales ahead 61-13 in the dying minutes. There was a late sting in the tail for the inspired Welsh, however, as Italy winger Leonardo Sarto burst down the left to score and Luciano Orquera kicked the touchline conversion to give Ireland and England a lifeline. England, knowing the monumental nature of their task at Twickenham, started superbly, scoring an early try through scrumhalf Ben Youngs. But they were rocked by conceding two quick tries in the first half to Sebastien Tillous-Borde and Noa Nakaitaci which turned a 7-3 deficit into a 15-7 lead for France. England hit back through Anthony Watson and Youngs to lead 27-15 at halftime and the tries continued to flow as Maxime Mermoz and George Ford each crossed under the posts. Jack Nowell produced a brilliant finish for England but prop Vincent Debaty galloped 70 metres to reply for France. Billy Vunipola bundled over and Benjamin Kayser did the same before Nowell's second took England beyond their previous highest score against France, a 48-19 win in 2001. They pounded the line but France, who had conceded only two tries in their previous four games, held out, leaving 82,000 England fans breathless and hugely disappointed at the same time. "I'm gutted really," England coach Stuart Lancaster told the BBC. "It was one of the most courageous performances I've seen from a team. It was an unbelievable game of rugby. "The first two France tries hurt us. But to come back like we did -- it will go down as one of the great games of rugby."