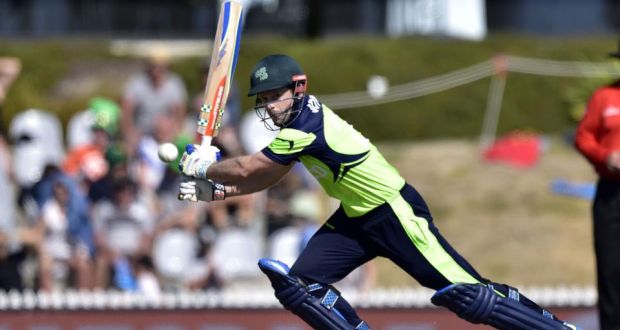 ADELAIDE - Ireland captain William Porterfield won the toss and decided to bat first against Pakistan in a key cricket World Cup Pool B encounter at the Adelaide Oval on Sunday. The winner of the match will advance to the quarter-finals while the losing team can still progress but face elimination if West Indies beat the United Arab Emirates in Sunday's other match and finish with an superior net run-rate. Both teams have won three and lost two of their first five pool matches. Pakistan go into the contest without injured paceman Mohammad Irfan and senior batsman Younus Khan with Haris Sohail and Ehsan Adil replacing them in the squad for the 1992 champions. "It's always a good pitch to bat on so our bowling needs to be on the target," Pakistan skipper Misbah-ul-Haq said. Ireland retained the same team that lost to India. "It looks a very good pitch. The score has been pretty high in the competition," Porterfield said at the toss, acknowledging it would not be easy to put up a big total against Pakistan's formidable bowling attack. "It's obviously one of their strengths. So, we got to start very well with the bat, get through the first 10-12 overs and save it for the back end. The way we have done it so far is very pleasing, so we just need to go and do that again." Pakistan: Sarfraz Ahmed, Ahmed Shehzad, Haris Sohail, Misbah-ul-Haq (captain), Sohaib Maqsood, Umar Akmal, Shahid Afridi, Wahab Riaz, Sohail Khan, Rahat Ali, Ehsan Adil. Ireland: William Porterfield (captain), Paul Stirling, Ed Joyce, Niall O'Brien, Andy Balbirnie, Gary Wilson, Kevin O'Brien, John Mooney, Stuart Thompson, Alex Cusack, George Dockrell. - Reuters