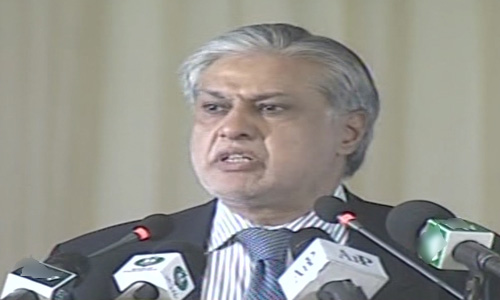 KARACHI (92 News) – Federal Finance Minister Ishaq Dar has claimed that the power crisis will end by 2017 and they will give a very improved Pakistan to the masses in three years. Addressing a ceremony at Karachi Stock Exchange on Wednesday, he said that Zarb-e-Azb operation was launched after dialogues. He appreciated the performance of Karachi Stock Exchange. The finance minister said that 900,000 jobs will be given to people. He said that the country can become the second biggest economy of the world by 2050. Ishaq Dar claimed that the government has given Rs 1,400 billion to the provinces against the allocated Rs 1,100 billion and now the amount is being taken to Rs 1,600 billion. He said that Pakistan’s development fund has been increased to Rs 525 billion from the previous amount of Rs 300 billion.