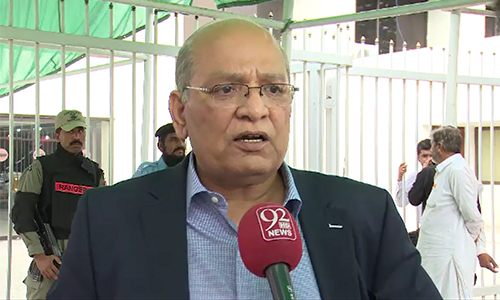 ISLAMABAD (92 News) – Federal Minister for Climate Change Mushahidullah Khan has claimed that ISI former chief Zaheerul Islam Abbasi wanted to occupy the power by removing civil and military leadership during the sit-ins of the Pakistan Tehreek-e-Insaf and Pakistan Awami Tehreek. In an interview with the BBC after one year of the sit-ins, he said that then ISI chief Zaheerul Islam Abbasi had hatched a conspiracy to occupy the country by removing the military and civil leadership. Mushahidullah Khan said that the conspiracy was exposed when the Intelligence Bureau taped the conversation of Lt-Gen Zaheerul Islam in which he was saying that somehow chaos had to be created during the sit-in and occupy the Prime Minister House. He said that Prime Minister Nawaz Sharif had called COAS General Raheel Sharif to a meeting and the audio tape was played before him on August 28 evening. Taking notice of the minister’s statements, the PM House issued a news release, asking Mushahidullah Khan to explain his remarks. The release also said that Prime Minister Nawaz Sharif has never heard such an audio tape, nor is he aware of its existence. Federal Minister for Information and Broadcasting Pervaiz Rasheed said that neither a tape was played nor such incident occurred. On the other hand, Mushahidullah Khan also denied the interview, saying the interview is totally baseless and incorrect. He said that he had no enough money to sue the BBC.