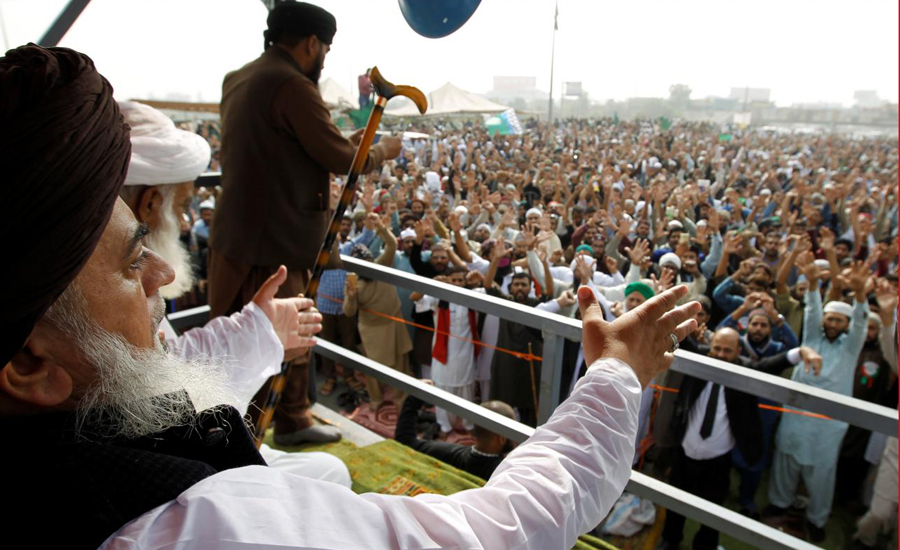 ISLAMABAD (92 News) – Hundreds of activists of religious parties’ have on Wednesday continue to stage sit-in at Faizabad on 17th day as a deadlock in the negotiations with the government continues to persist. Religious groups are staging over two-week-long protest at Faizabad Interchange, the main entry point of the capital city. Despite talks between the two sides for the second consecutive day at Punjab House, a deadlock persists between the authorities and protesters over the Faizabad blockade. The federal government might opt for ‘option b’ to disperse the protesters of a sit-in at Faizabad interchange before Eid Milad-un-Nabi as it is running short of options to handle the situation peacefully. The matter was on top of the agenda during the parliamentary party meeting of the Pakistan Muslim League-Nawaz on Tuesday with Prime Minister Shahid Khaqan Abbasi in the chair, it is further learnt. However, the meeting remained inconclusive over taking a decisive action. Earlier, the government and the representatives of Tehreek-e-Labbaik agreed to form a new committee headed by Pir Haseen ud Deen Shah to end the siege of the federal capital. The Islamabad High Court (IHC) warned authorities to obey its order to shut down a protest by religious parties, which has sparked widespread anger by virtually bringing the capital to a halt for two weeks. The Islamabad High Court said it would hold officials in contempt if they did not launch a crackdown, as enraged commuters called for the roads to be opened and critics accused the government of creating a dangerous precedent by failing to take a tough stance. The roughly 2,000 protesters from the Tehreek-e-Labaik Ya Rasool Allah (SAW) have blocked a main highway used by thousands of commuters since November 6, causing hours-long traffic snarls. The government insisted on negotiating with the demonstrators even after the court issued an order for the roads to be cleared by last Saturday. "This is a very serious situation," a written statement from the court said Monday. It blasted the lack of progress as "beyond comprehension" and said the suffering of citizens had reached its limit. The protesters are demanding the resignation of federal law minister Zahid Hamid over a hastily-abandoned amendment to the oath election candidates must swear. Interior minister Ahsan Iqbal insisted negotiations would continue. "We want to resolve this issue immediately and peacefully. Pakistan cannot afford any unrest," he said. He urged the religious group protesting in Islamabad to obey the law of land and call off their sit-in as the law regarding Khatm-e-Nabuwwat has been made more sound and effective. Protesters at the demonstration, where young men armed with clubs are refusing to let vehicles pass and at times pelting those who come near with stones, were defiant. Hundreds of activists of religious parties’ also staged a sit-in at Numaish Chorangi in Karachi, while a protest rally was taken out in Peshawar’s Gulbahar area by the Tehreek Labaik Ya Rasool Allah (PBUH) which ended at the Press Club. Meanwhile, heavy contingent of Rangers, Frontier Corps and police are deployed in the area whereas armored vehicles, prison vans and ambulances are also present. Police personnel deployed at Faizabad as protest continue despite stern warnings. The Islamabad-Rawalpindi administration had sealed the entry and exit routes of Faizabad Interchange leaving the citizens in trouble. Law-enforcers, equipped in riot gear, were present near the site of the sit-in but had not taken any action as the hour given by the district administration to disperse passed. All hospitals in the twin cities were put on high alert and the leaves of doctors and paramedical staffs have been cancelled. Residents of the area have also been directed to stay in houses and avoid inter-city movement.