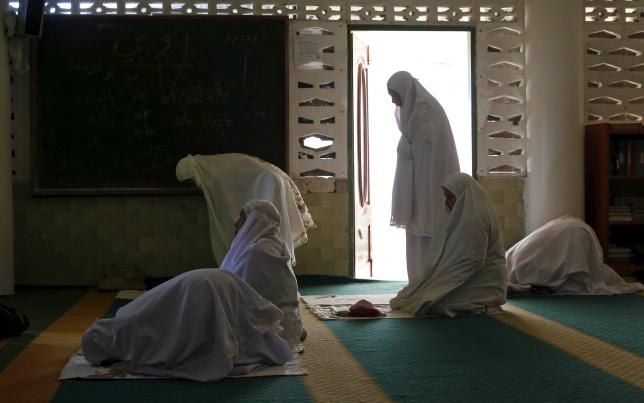 KOTA BHARU, MALAYSIA - Feuding over an Islamic penal code that stipulates stoning for adultery and amputation for theft has put a spotlight on Malaysian Prime Minister Najib Razak's struggle to secure the majority Muslim vote and fend off attacks on his leadership. The 'hudud' controversy was triggered by the Islamist party that rules Kelantan, a northern state where nightclubs are banned and there are separate public benches for men and women. Parti Islam se-Malaysia's (PAS) push to have 'hudud' recognized under federal law, so it can be implemented in Kelantan, risks splitting the national opposition coalition to which it belongs: an already wobbly three-party alliance. The opposition's squabbles would be heartening for Prime Minister Najib were it not for the divisions that the row has highlighted within his own party, the United Malays National Organisation (UMNO). Stunned by the desertion of ethnic Malay votes in the 2013 election, conservatives within UMNO see the issue as an opportunity to burnish the Islamic credentials on which their party built its power base in this Muslim-majority country. Malays make up almost all of Malaysia's Muslim population. UMNO lawmakers in Kelantan openly backed the push for hudud, a calculated decision "not to offend the sensitive Malay vote base", according to a senior UMNO leader. At a national level, though, the party has yet to make a public stand on the issue. Najib himself has not stated a view, but he is widely seen as a moderate on Islamic issues. "Hudud has always been there in Malaysia. The only difference is that it was kept under control by previous leaderships," said Wan Saiful Wan Jan of the Kuala Lumpur-based Institute for Democracy and Economic Affairs (IDEAS) think tank. "His silence has now encouraged hudud supporters and made it difficult for others to argue for a rational dialogue." The prime minister’s office did not respond to a request for comment. A sharp slowdown in the economy due to plunging oil export earnings and revelations of huge losses at state fund 1MDB have already left Najib on the back foot. The country's longest-serving prime minister, Mahathir Mohamad, has lashed out at Najib from his retirement, accusing him of not being strong enough to stifle the clamor for hudud and demanding his resignation. On Thursday, Mahathir criticized UMNO leaders who had supported hudud. "PAS' intentions - and also UMNO Kelantan's - in introducing PAS's hudud is for political interests. This makes PAS's hudud punishments and its support by UMNO unIslamic," he said in a blog post. LASHINGS, AMPUTATIONS PAS says a poll it carried out in Kelantan found more than 90 percent support for hudud, which would introduce the amputation of hands for robbery and raise the maximum number of lashings for crimes to 100 from six. "If one person has his hands cut off, the other 10 thinking of the same crime will see it and stop," said Wan Qussairi Wan Mohamed, an official at one of the many madrasas, or Islamic schools, in Kelantan's main city of Kota Bharu. "This is God's guarantee." PAS is now lobbying lawmakers in the 222-seat national parliament to support its hudud move, which has already been approved by the state assembly. "There are 136 members of parliament who are Muslim and we want all of them to support it, on the basis of religion, not the party," Kelantan Deputy Chief Minister Nik Amar Abdullah told Reuters. PAS President Abdul Hadi Awang said his party would keep pressing for hudud with or without the support of its allies in the national opposition alliance, Pakatan Rakyat (PR). "I want PR to stay. But we have principles, we can't sell our principles and objectives," he told Reuters. Outside Kelantan, hudud has become a political football as parties jostle ahead of elections due in three years, mindful that the ruling coalition only just clung to power in 2013 with its thinnest majority since independence. Many UMNO leaders, fearing they could lose the 2018 election, want Najib to keep the party in tune with what is widely seen as creeping conservatism among ethnic Malays. - Reuters