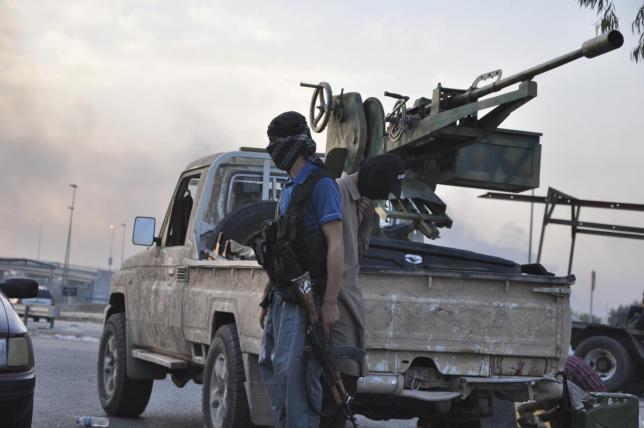 BAGHDAD - Islamic State militants attacked the capital of Iraq's vast Anbar province on multiple fronts on Friday, seizing two areas on the city outskirts in a setback for a government campaign to retake the desert terrain. The jihadists deployed vehicle and suicide bombs to tear through Iraqi government lines north of the city of Ramadi overnight before attacking on foot, said security officials and a hospital source. The head of Anbar's provincial council, Sabah Karhout, called on Prime Minister Haider al-Abadi to send urgent military reinforcements and supplies to fighters, saying they were running low on ammunition. Abadi visited Anbar on Tuesday and declared the start of the operation to liberate the Sunni Muslim heartland, seeking to build on a victory over the extremist Islamic State last week in the city of Tikrit. But a police source in Ramadi said early on Friday the insurgents had taken half of the Albu Faraj area, and provincial council member Athal al-Fahdawi later said it had been overrun completely. Hundreds of families were fleeing Albu Faraj, just north of Ramadi and a car bomb blew up the bridge linking the two places across the Euphrates river, a police source said. An army officer and the police source blamed members of the Albu Faraj tribe who live in that area for letting the militants infiltrate their area. The insurgents also took over the adjacent Albu Aitha area, according to Fahdawi and local tribal leader Sheikh Ghassan al-Ithawi. Large parts of Anbar had slipped from the government's grasp even before Islamic State overran the northern city of Mosul last June and surged through Sunni areas of Iraq. The Islamic State controls large swathes of both Syria and Iraq, last year declaring a caliphate across the territory. Security forces and Shi'ite Muslim paramilitaries have since regained some ground in Iraq, although core Sunni territories remain under Islamic State control including Anbar and the northern province of Nineveh. In Anbar, which shares a long border with Syria, Saudi Arabia and Jordan, pockets of territory have remained under government control and Ramadi itself has been contested. Shi'ite militia have played a leading role in reversing the insurgents' advances elsewhere, but officials from predominantly Sunni Anbar have expressed reservations about a role for the paramilitary forces on the battlefield. In the capital Baghdad, 13 people were killed in three separate explosions, medical and security sources said. - Reuters