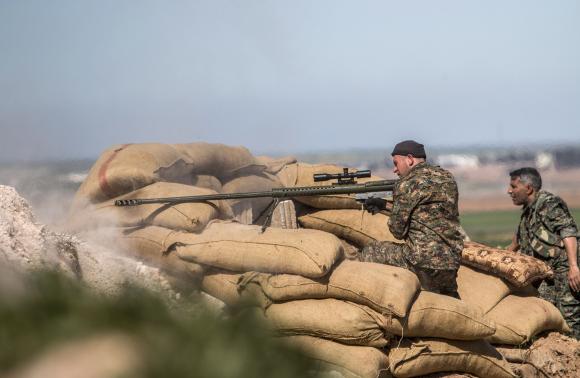 BEIRUT (Reuters) - Hundreds of Islamic State fighters have launched an attack on Kurdish forces in northeastern Syria, triggering fierce fighting that has killed dozens on both sides, a group monitoring the war said on Wednesday. The Kurdish YPG militia, backed by US-led air strikes, had made significant gains in recent weeks against Islamic State in the region, cutting an important supply route from territory controlled by the militant group in Iraq. Islamic State appeared to try to seize back the initiative on Tuesday, attacking Kurdish forces using tanks and heavy weapons around Ras al-Ayn town near the Turkish border, the Britain-based Syrian Observatory for Human Rights said. An official in a Kurdish-run defense council in the area also reported heavy clashes in the area of Ras al-Ayn and said the Kurdish forces had been forced to withdraw from a nearby village. "There are martyrs and dead but the number of martyrs is unknown so far," said the official, speaking via Skype. The fighting continued into Wednesday. It was not clear exactly how many fighters had been killed on both sides. The Kurdish campaign in northeastern Syria has been closely coordinated with the US-led coalition that is fighting to roll back Islamic State in Syria and Iraq. The YPG has emerged as the main partner for the US-led alliance fighting Islamic State on the ground in Syria. Backed by Iraqi Kurdish peshmerga fighters and air strikes, the YPG defeated Islamic State in the border town of Kobani in January. After rapid advances against Islamic State, the YPG announced on Feb. 27 it had seized the strategically important town of Tel Hamis from Islamic State. The US-led alliance said in a statement on Tuesday that forces opposed to Islamic State had seized key territory near Tel Hamis last week. It did not identify them as the YPG, instead describing the fighters as "anti-ISIL forces". "KEY TERRAIN" The statement said the operation in northeastern Syria had "denied (Islamic State) access to primary travel routes historically used to move its personnel and materials into Iraq – namely Tal Afar and Mosul." It said it would continue to support efforts to attack and defeat Islamic State. "The determination of these anti-ISIL forces and our precision airstrikes enabled us to deny Daesh this key terrain in Syria," Army Lieutenant General James Terry said. The battle for Kobani was the first publicly-declared example of US-led forces closely coordinating militarily with a ground force to battle Islamic State. The United States says it wants to train and equip non-jihadist groups to fight Islamic State elsewhere in Syria. The training is due to get underway in Jordan this month. The US military has not identified which rebels it plans to train.