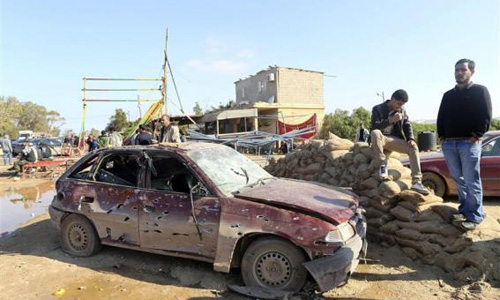 LIBYA - Islamic State militants claimed a suicide bombing that killed seven people at an army checkpoint in the Libyan city of Benghazi on Tuesday and triggered retaliatory air strikes by army forces. In a separate incident in Libya's second-largest city, where army forces are fighting Islamist militants, a rocket hit a residential building, killing a 17-year old girl and another person, medics said. Three others were wounded. It was unclear who fired the rocket. Islamic State claimed responsibility for the checkpoint suicide bombing in a statement posted on Twitter. The violence in Benghazi typifies chaos in Libya where two rival governments and parliaments allied to armed factions are competing for power four years after the ousting of Muammar Gaddafi. Militants claiming affiliation to Islamic State, the group that controls much of Syria and Iraq, have exploited the turmoil by expanding in several parts of the oil producer. The militants have in recent weeks claimed several high-profile attacks such as the storming of the Corinthia luxury hotel in Tripoli, killing five foreigners and the beheading of 21 Egyptian Copts on a beach. A car laden with explosives drove into an army checkpoint in the Lithi district of Benghazi, where army officials say Islamist militants are holed up. Five of those killed were soldiers, the other two civilians, army officials said. Later in the evening, war planes took off from Benghazi airport and attacked suspected Islamist positions, said Naser al-Hasi, a spokesman for the military base. Benghazi is suffering heavy clashes almost daily between Islamist fighters and forces of the internationally recognized government. The port has been closed for more than four months, disrupting wheat and food imports. The latest violence came after Islamist militant group Ansar al-Sharia said in a statement a senior commander, Mohamed al-Areibi, had been killed in Benghazi on Monday. Libya's official government has been based in the east since a rival faction seized the capital in Tripoli in August, reinstating a previous assembly challenging the elected assembly also based in the east. Both governments rely on former rebels who helped topple Gaddafi and are now caught in a power struggle. In Benghazi the official government of Premier Abdullah al-Thinni has allied itself with general Khalifa Haftar who in May started his own fight against Islamists. The alliance started a new offensive in October to control the city and fighting continues. - REUTERS