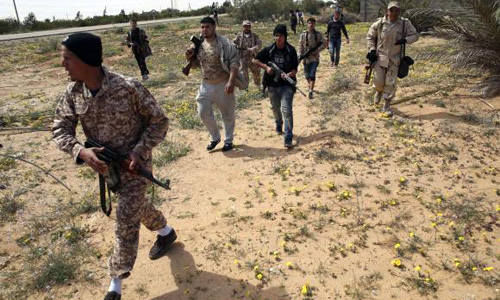 TRIPOLI (Reuters) - Militants loyal to Islamic State claimed a bomb attack on a police checkpoint in the Libyan capital on Sunday, the latest in a series of attacks in Tripoli. A car bomb also exploded in the western city of Misrata. No one claimed responsibility immediately but the bomb targeted a force tasked with fighting Islamic State militants. Militants loyal to Islamic State, the group that controls much of Syria and Iraq, have been exploiting chaos in Libya where two governments allied to armed factions are vying for power four years after the overthrow of Muammar Gaddafi. A bag of explosives went off at a checkpoint next to a Janzour security building, a Tripoli suburb, wounding five policemen, said Essam Nas, a security spokesman. Islamic State militants published on social media a picture of what they said was the site of the explosion. In a suburb of Misrata, a car bomb exploded in front of a camp of a faction called 166 battalion, killing one person, said Mahmoud al-Shaoush, one of its members. The force has been tasked with fighting Islamic State militants in Sirte, a central city. Clashes broke out between the two groups on Saturday east of Sirte. Misrata, Libya's third-largest city located to the east of Tripoli, is the power base of a faction called Libya Dawn which seized Tripoli in August, forcing the internationally recognized government to the east. Misrata had been so far spared the violence gripping much of the major oil producer. Groups of Islamist militants, who have declared loyalty to Islamic State over the past six months, have claimed responsibility for several high-profile attacks in what appears to be an intensifying campaign. They claimed responsibility for an attack on the Corinthia luxury hotel in Tripoli in January, which killed five foreigners, as well as a group of Egyptian Copts in Sirte, triggering air strikes by Egypt. The site of Sunday's explosion in the Tripoli area is close to the Palm City compound, which used to be a favorite place of accommodation for expatriates until last summer when most left due to the deteriorating security situation. The conflict has knocked down oil production as both governments fight over oil ports, while some fields have been attacked by Islamic State militants.