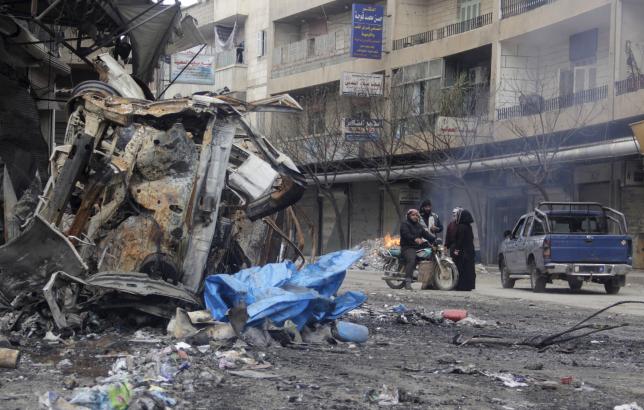 BEIRUT - Islamic State fighters seized most of a Palestinian camp on the outskirts of the Syrian capital Damascus on Wednesday, nearing President Bashar al-Assad's seat of power. A rival jihadist group said sharia law would govern a city seized by rebels in the northwest of Syria. Though unrelated, the developments showed the dominant role of jihadists in a war entering its fifth year and the risk they pose to Assad even as he appears in control of Damascus and other populous areas in western Syria. The Yarmouk Palestinian refugee camp, a few kilometers (miles) from the heart of Damascus and home to thousands of people, has been in insurgent hands and besieged by government forces since the early days of a conflict that began in 2011. Mirroring the way Islamic State has grown elsewhere in Syria, its fighters seized control of areas of the camp from other insurgents, helped by rebels from the rival al Qaeda-linked Nusra Front who switched sides, a political activist in the area said. "They pushed from the Hajar Aswad area and Nusra fighters have joined them, they have pledged loyalty to Daesh," the activist said, speaking via Skype on condition of anonymity. Daesh is an Arabic name used to refer to Islamic State by its opponents. Anwar Abdel Hadi, the Palestine Liberation Organization representative in Damascus, said: "(Islamic State) went into Yarmouk today. There are clashes between the militants at the moment." The British-based Syrian Observatory for Human Rights said Islamic State controlled some of the main streets in the devastated camp. Government officials could not be reached for comment. Yarmouk was home to half a million Palestinian refugees before Syria's conflict erupted in 2011. Its population is now about 18,000, according to a UN estimate. Hassan Hassan, an analyst and author of a book about Islamic State, said the group had long wanted a foothold close to the capital but that it was unlikely to be able to storm it. "The regime has established strong checkpoints and infrastructure to prevent forces from actually getting inside Damascus. But they are edging closer." Islamic State has been trying to expand into western areas of Syria far away from its strongholds on the other side of the country, where it has faced a campaign of air strikes by the United States and allied Arab countries. Recent forays by Islamic State have focused on government-held areas that are not being targeted in that campaign. Such attacks appear to be gathering pace. Its fighters killed 45 people including entire families, burning some people to death, in a massacre overnight Monday-Tuesday in the government-held village of Mabouja, a 60-km (40 mile) drive east of Hama city, the Observatory reported. SHARIA LAW FOR IDLIB The United States has ruled out the idea of linking up with Assad against their common enemy. Washington sees Assad as part of the problem. Together with Turkey and the conservative Sunni governments of Saudi Arabia and Qatar, they want to see him gone from power. Assad, backed by his allies in Shi'ite Islamist Iran and the Lebanese group Hezbollah, has sought to shore up control over the west, particularly the cities of Homs, Hama and the coast. On Saturday, the government lost control of the northwestern city of Idlib to an alliance of Islamist groups including the Nusra Front, which fought Islamic State last year though they share a similar interpretation of Islam. Nusra Front leader Abu Mohamad al-Golani indicated on Wednesday that Idlib, seized by groups including the hardline Ahrar al-Sham, would be run according to sharia law. "We salute the people of Idlib and their stand with their sons, the Mujahideen, ... and God willing they will enjoy the justice of sharia, which will preserve their religion and their blood," Golani said in an audio recording posted online. Idlib is only the second provincial capital to slip from government hands. The first was Raqqa, which Islamic State has turned into its de facto capital. Idlib is around 30 km (20 miles) from the Turkish border. The groups that seized Idlib have rejected a call by the mainstream, Turkey-based opposition to headquarter an interim Syrian government there. The Observatory reported that insurgents were destroying cigarettes and tobacco, which many Islamists view as banned in Islam. The news agency of the Vatican's missionary department reported on its website that a 57-year-old Greek Orthodox priest had been kidnapped by "jihadist militias" in Idlib after he decided to stay in the city. It cited local sources. Golani also said Idlib residents would be treated well and public property would be protected. He urged employees of essential facilities including bakeries to go back to work and said an Islamic court should be set up to settle disputes. Nusra Front's influence has been expanding in northwestern Syria. It has crushed at least two Western-backed rebel groups in recent months and seized weapons including US-made anti-tank weapons with which they were supplied. Golani said the Idlib takeover showed that seeking the support of the West and regional powers was an "illusion". The southern region near the border with Jordan and Israel is one of the last footholds of mainstream rebel groups. They have been fighting back against an offensive launched by Damascus to reclaim the border zone. In a significant escalation, insurgents attacked government forces near a border crossing between Syria and Jordan on Wednesday, leading Jordan to shut the frontier. The mainstream rebels in the area, known as The Southern Front, said they were involved in the offensive to take the border area, making up 80 percent of the fighters. "The target is to capture the last point of the regime on the border," Southern Front spokesman Issam al-Rayes said, estimating the overall number of fighters involved at 1,500. - Reuters