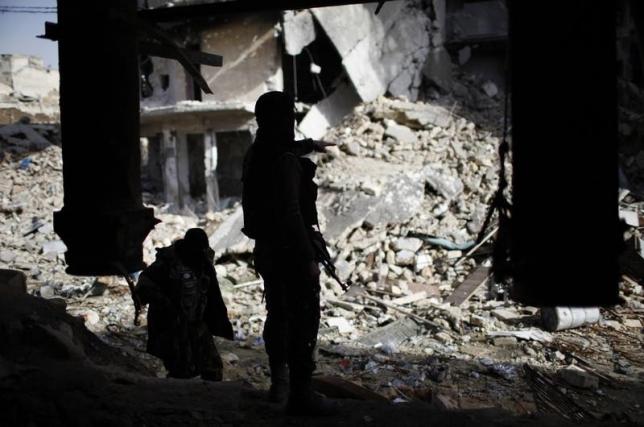 BEIRUT - Islamic State fighters battled rival insurgents for control of a Palestinian refugee camp on the Damascus outskirts on Friday, a monitoring group said, attempting to secure a foothold close to President Bashar al-Assad's seat of power. Islamic State took most of Yarmouk refugee camp on Wednesday, its first major presence in the area around the capital and home to other insurgents. Their assault has since been bogged down in street fighting with rival Islamist militants, said the Syrian Observatory for Human Rights, which monitors the conflict from Britain. The ultra-hardline Islamic State already controls swathes of eastern Syria and Iraq and is being targeted by a US-led campaign of air strikes. The Observatory said Islamic State has executed 69 people, including children under 18 and women, over the past five days as it clashed with the army and other militia around the country. Several were killed because they were believed to work for the Syrian government, it said, providing a video of nine men who were shot dead. It said most of the executions happened in the western Hama province, where Islamic State has advanced into new territory. The Yarmouk refugee camp, which was home to half a million Palestinians before the conflict began in 2011, has been held by anti-Assad insurgents and besieged by government troops since the early days of the war. It lies just a few kilometres (miles) from the heart of Damascus, which is still firmly in government control. The United Nations has said it is extremely concerned about the safety and protection of Syrian and Palestinian civilians there. It estimates the population of Yarmouk at about 18,000, with most of its residents having long since fled. Government officials could not be reached for comment on Friday. - Reuters