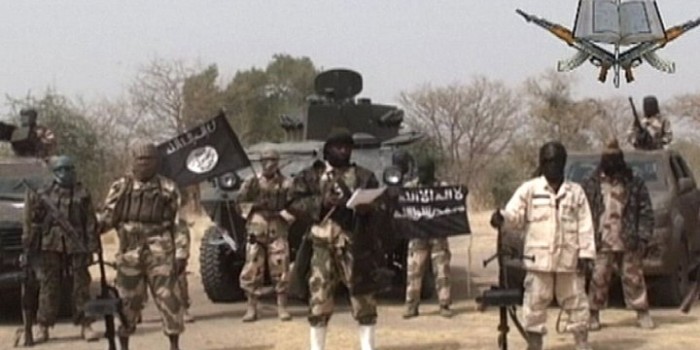 BEIRUT - The leader of the Islamic State militant group that controls tracts of Syria and Iraq has accepted a pledge of allegiance from Nigerian Islamists Boko Haram, his spokesman said, calling on supporters to fight in Africa. Boko Haram, which has killed thousands and kidnapped hundreds during a six-year campaign to carve out an Islamist state in northern Nigeria, pledged its allegiance last week, highlighting increased coordination between jihadi movements across north Africa and the Middle East. "Our caliph, God save him, has accepted the pledge of loyalty of our brothers of Boko Haram so we congratulate Muslims and our jihadi brothers in West Africa," Islamic State spokesman Abu Mohammad al-Adnani said in an audio message, referring to his group's leader Abu Bakr al-Baghdadi. Islamic State, an ultra-hardline offshoot of al Qaeda, has declared a caliphate in captured territory in Iraq and Syria and has gained global notoriety for killing or kidnapping members of ethnic and religious minorities and posting videos of its members killing Arab and Western hostages. In the audio message, Adnani called on Muslims who could not join Islamic State in Iraq and Syria to enter combat in Africa instead, saying Boko Haram's pledge had opened a "new door for you to migrate to the land of Islam and fight." "We are calling you up for jihadis, go." The group, which rejects all but its own limited interpretation of early Sunni Muslim theology as heresy, also issued a threat to Jews and Christians. "If you want to save your blood and money and live in safety from our swords ... you have two choices: either convert or pay jezyah," he said, referring to tax for non-Muslims under Islamic rule. "(Otherwise) you will soon bite your fingers with remorse." Adnani also played down reports of military setbacks for the group which is coming under attack from Iraqi and Kurdish forces as well as US-led air strikes. In Syria, Kurdish YPG fighters have cut an important supply route from territory controlled by Islamic State in Iraq. Islamic State has also faced a major counter-offensive by Iraqi security forces and militias inIraq, who fought their way into Saddam Hussein's home city of Tikrit on Wednesday, advancing on two fronts. "The State remains steadfast ... and is becoming stronger and continues to be victorious," Adnani said, describing gains claimed by its enemies as "fake". "It is a mere taking back of a few villages in a war that is about attack and retreat," he said, in the group's first official reaction to the developments. While Islamic State's enemies seek to control Iraqi cities and other places, the group is targeting western capitals, Adnani said. "We want, God willing, Paris before Rome." Islamic State fighters stormed into Tikrit last June during a lightning offensive that was halted just outside Baghdad. – Reuters