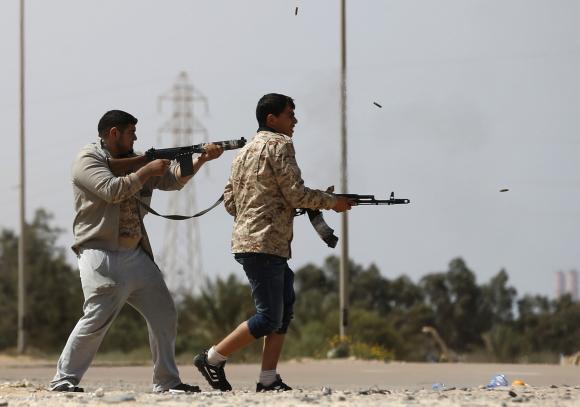 TRIPOLI/MISRATA - Ten fighters loyal to the self-proclaimed government that controls Tripoli were killed by Islamic State militants in central Libya on Wednesday, officials said. Libyan hardline Islamists who have allied themselves to the Islamic State group that have surged to prominence in Iraq and Syria had until recently been mostly active in the east, where the internationally recognized government is now based. But they have expanded westwards in recent weeks to the city of Sirte, taking government buildings, a hospital and the university, posing a challenge to the Tripoli-based government, and its allied factions which have engaged them in battle. "A number of our hero army members were assassinated this morning by the Islamic State in the Nawfaliyah area," said Osama Abu Naji, a senior official in the Tripoli-based government. "The victims were assassinated, it was not confrontation," he told reporters, without elaborating. Nawfaliyah is a town southeast of Sirte. Anticipating more clashes, Sirte residents were seen leaving in a column of cars on the main highway to Misrata, a Reuters reporter said. Forces from Misrata loyal to Tripoli initially deployed in December east of Sirte to try seize Libya's biggest oil ports, Es Sider and Ras Lanuf, from forces loyal to the internationally recognized government. But they have been dragged into fighting the Islamists who are exploiting a power vacuum created by the existence of two rival governments. Four years after the ousting of Muammar Gaddafi, Libya is divided, with the official premier Abdullah al-Thinni working from the east since a rival faction seized Tripoli in August, reinstating a previous parliament and setting up a rival administration. Militants loyal to Islamic State have claimed several high-profile attacks in the past two months including the storming of Tripoli's luxury Corinthia hotel and the beheading of 21 Egyptian Copts from Sirte. - Reuters