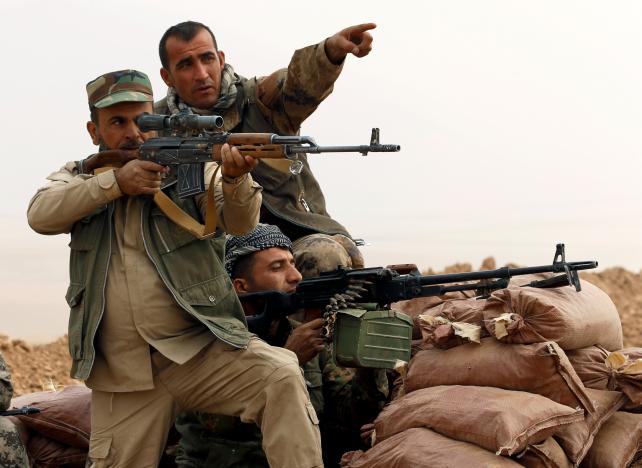 BAGHDAD/BARTELLA, IRAQ – Islamic State expanded its attacks on Monday against the army and Kurdish forces across Iraq, trying to relieve pressure on the militant group's defenses around Mosul, its last major urban stronghold in the country.
About 80 Islamic State-held villages and towns have been retaken in the first week of the offensive, bringing Iraqi and Kurdish forces closer to the edge of the city itself - where the battle will be hardest fought. The Mosul campaign, which aims to crush the Iraqi half of Islamic State's declared caliphate in Iraq and Syria, may become the biggest battle yet in the 13 years of turmoil triggered by the U.S.-led invasion of Iraq in 2003, and could require a massive humanitarian relief operation. Some 1.5 million residents remain in the city and worst-case forecasts see up to a million being uprooted, according to the United Nations. U.N. aid agencies said the fighting has so far forced about 7,400 to flee their homes. In a series of counter-attacks on far-flung targets across Iraq since Friday, Islamic State fighters have hit Kirkuk, the north's main oil city, the town of Rutba that controls the road from Baghdad to Jordan and Syria, and Sinjar, a region west of Mosul inhabited by the persecuted Yazidi minority. Yazidi provincial chief Mahma Xelil said at least 15 militants were killed in the two-hour battle in Sinjar and a number of their vehicles were destroyed, while the peshmerga suffered two wounded. Islamic State said two peshmerga vehicles were destroyed and all those on board were killed. Islamic State committed some of its worst atrocities in Sinjar when it swept through the Yazidi region two years ago, killing men, kidnapping children and enslaving women. Kurdish fighters took back the region a year ago. REGIONAL INTERVENTION The Iraqi force attacking Mosul is 30,000-strong, joined by U.S. special forces and under American, French and British air cover. The number of insurgents dug in the city is estimated at 5,000 to 6,000 by the Iraqi military. Pentagon spokesman Captain Jeff Davis said Iraqi security forces and the peshmerga were making "solid progress" in their advance on Mosul, but were facing heavy resistance. The Mosul campaign has drawn in regional players and highlighted how Iraq, like neighboring Syria, has become a platform for influence between rival parties - Sunni-ruled Turkey and its Gulf allies and Shi’ite Iran and its client militias. Turkey and Iraq's Shi'ite-dominated central government are at loggerheads over the presence - unauthorized by Baghdad - of Turkish troops at a camp in northern Iraq. Ankara fears that Shi'ite militias, which have been accused of abuses against Sunni civilians elsewhere, will be used in the Mosul offensive. Turkey's own presence in Iraq has also helped inflame sectarian passions among Shi'ites. Turkish artillery has already played a role in the battle and four Turkish fighter jets are on standby to take part in air operations, Foreign Minister Mevlut Cavusoglu said on Monday. Iraq's Prime Minister Haider al-Abadi denied that Turkey had a role in the operation. "We don't want the Turkish military force," he said in a statement. The region of Nineveh around Mosul is a mosaic of ethnic and religious groups - Arabs, Turkmen, Kurds, Yazidis, Christians, Sunnis, Shi'ites - with Sunni Arabs the overwhelming majority. BAGHDADI'S "CALIPHATE" It was from Mosul's Grand Mosque that Islamic State leader Abu Bakr al-Baghdadi declared his caliphate in 2014. Within a year his group was in retreat in Iraq, having lost the Sunni cities of Tikrit, Ramadi and Falluja. The Iraqi army last week dislodged insurgents from the main Christian region east of Mosul and its elite unit, the Counter Terrorism Service (CTS) has pressed ahead with operations to clear more villages since Saturday. CTS forces took a handful of villages west of the Christian town of Bartella in an early morning attack on Monday and are now six kilometers (about four miles) east of Mosul. The areas taken so far have been largely empty of civilian populations, but civilians could be living in the two villages lying ahead, Bazwaia and Gogjali, bordering Mosul proper. Islamic State used improvised explosive devices and snipers in the areas retaken on Monday, as they have in many previous battles, Brigadier General Faleh Fadel Jasim said. The militants dug a 10 km-long network of tunnels under Bartella, with food and weapons stores, to hold up the army, he said. "They tried making fortified defense lines but they weren't able to." The army's press office said a total of 78 villages and town have been recaptured between Oct. 17, when the Mosul operation started, and Sunday evening, more than 770 Islamic State fighters have been killed. Islamic State says it has killed hundreds of fighters from the attacking forces and blocked their progress. A French defense source said on Monday hundreds of Islamic State fighters have left Syria with the aim of reinforcing their stronghold in northern Iraq. "(In recent weeks) we saw movements from Syria to Mosul," the source said. In Washington, Pentagon spokesman Jarvis also said Islamic State was bringing more reinforcements from outside. The army is trying to advance from the south and the east while Kurdish peshmerga fighters are holding fronts in the east and north. After Islamic State's attack on Friday in Kirkuk, the hardline Sunni militant group has launched other diversionary attacks in Sinjar and Rutba, 360 km west of Baghdad, where they killed at least seven policemen, according to security sources. Federal police units which arrived in Rutba overnight were backing up the local forces, according to the sources who estimate that 16 insurgents have been killed so far. Islamic State said in an online statement that dozens of security force members and pro-government Sunni tribal forces had fled Rutba. –Reuters