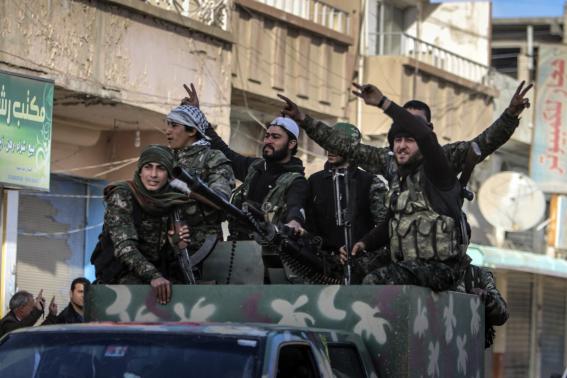 BEIRUT (Reuters) - Kurdish forces dealt a blow to Islamic State by capturing an important town on Friday in the latest stage of a powerful offensive in northeast Syria, a Kurdish militia spokesman said. Islamic State has been forced into retreat across parts of the strategic region, a land bridge between territory it controls in Syria and Iraq, even as its fighters have mounted new raids this week on Assyrian Christian villages, abducting more than 200 people. The capture of Tel Hamis was announced by the Kurdish YPG militia and confirmed by the Syrian Observatory for Human Rights, which monitors the country's civil war. "The flag is flying over Tel Hamis. We are now combing the city for terrorists and mines," militia spokesman Redur Xelil told Reuters. "Daesh continue to have a considerable number of territories and forces. But we can say we have stopped its advance," Xelil said, using the Arabic acronym of Islamic State The British-based Observatory said Kurdish forces killed at least 175 members and commanders of the ultra-hardline Islamist militants in an offensive which began last weekend. "The bodies of these fighters are still with the Kurdish militants," said the Observatory's head Rami Abdulrahman. He said the Kurds, with backing from US-led air strikes, have taken at least 103 villages in the area and are now in the village of Suleima on the border with Iraq. The United States and its allies have carried out hundreds of air strikes in Iraq and Syria since launching a campaign to "degrade and destroy" Islamic State, which last year declared a "caliphate" on territory it has captured in both countries. The US-led coalition has launched 20 strikes against Islamic State in Syria since early Thursday, its Combined Joint Task Force said on Friday. TOUGH FOE The Kurdish YPG militia has been one of Islamic State's toughest enemies in Syria. Last month it flushed the group out of Kobani on the Turkish border, breaking the militants' four-month siege of the town with the help of US and allied air support and Iraqi Kurdish reinforcements on the ground. Since then, Kurdish forces backed by other Syrian armed groups have pursued Islamic State fighters as far their provincial stronghold of Raqqa. But while the group has shown signs of strain after the Kobani battle, it is far from collapsing. This week it abducted at least 220 Assyrian Christians in the region of Tel Tamr, about 100 km (60 miles) west of Tel Hamis, according to the Observatory. Their fate remains unclear. "We do not know what happened or is happening to them, a prominent Syrian Christian, Bassam Ishak, told Reuters. "There are attempts from some church members to engage in negotiations but we do not how fruitful it will be." Syria's foreign ministry sent letters to the United Nations Secretary-General and Security Council regarding the attacks, appealing for international cooperation. "The international community should confirm its commitment to fighting terrorism .. through coordinating with Syria, which is standing as an impervious dam against the spread of international terrorism," state news agency SANA quoted the foreign ministry as saying. While bent on destroying Islamic State, the United States refuses to ally itself with President Bashar al-Assad in Syria's civil war. More than 200,000 people have been killed since 2011 in the conflict, which pits Assad's forces against an array of jihadist and other rebel factions. Washington on Wednesday condemned the attacks against Christians, which it said included the burning of homes and churches and abduction of women, children and the elderly. Islamic State has staged mass killings of religious minorities, including Yazidis in Iraq and Egyptian Coptic Christians in Libya, as well as fellow Sunni Muslims who refuse to swear allegiance to its caliphate.