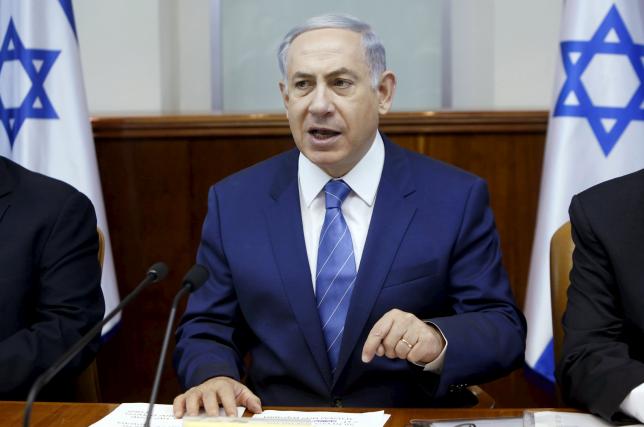 JERUSALEM - Israel's security cabinet approved on Sunday the detention of citizens suspected of waging violence against Palestinians without trial in a crackdown aimed at capturing the perpetrators of a lethal West Bank arson attack blamed on Jewish militants. The extension to Israelis of so-called "administration detention", a practice commonly applied to Palestinian militant suspects and condemned internationally, laid bare authorities' frustration at failing to curb Jewish ultra-nationalist attacks. Friday's torching of a Palestinian home killed a toddler and seriously injured his parents and brother, causing an outcry abroad and vows by Israeli Prime Minister Benjamin Netanyahu to crack down on what he deemed "terrorism" by "criminals in our nation". There was no claim of responsibility for the arson at Duma village, in the occupied West Bank. Graffiti in Hebrew reading "revenge" daubed at the site was consistent with past vandalism and other hate crimes by bands of young Jewish zealots targeting Arabs, Christians, peace activists or Israeli army property. With no arrests yet made for the arson, some Israeli commentators on Sunday questioned the resolve of security services which, when responding to Palestinian attacks, often round up suspects en masse as part of accelerated investigations. Such detainees are sometimes held without trial for months, a measure Israel says is required to prevent further violence in the absence of sufficient evidence to prosecute, or where going to court would risk exposing the identity of secret informants. Netanyahu's security cabinet, comprised of senior ministers, decided to extend such arrests to Israelis as well "to take all steps necessary to bring those responsible to justice and prevent such attacks from occurring in the future," a statement said. It said the methods approved included "the use of administrative detentions in appropriate cases," with the approval of the state attorney general. The cabinet called the arson "a terror attack in every respect" adding that security officials had been ordered "to take all steps necessary to bring those responsible to justice and prevent a recurrence of such attacks in the future." According to the Israeli human rights group B'Tselem, 5,442 Palestinians were in detention without trial as of June. The measure, which foreign critics see as a blow to due process of the law, has rarely been used against Israeli citizens. "To the best of my knowledge, there have been no instances of Israelis being held in administrative detention in recent years," said B'Tselem spokeswoman Sarit Michaeli. Israeli officials say the Jewish zealots elude discovery by operating in small networks that are hard for informants to penetrate, avoiding electronic communications that might be monitored, and clamming up when detained for interrogation. - Reuters