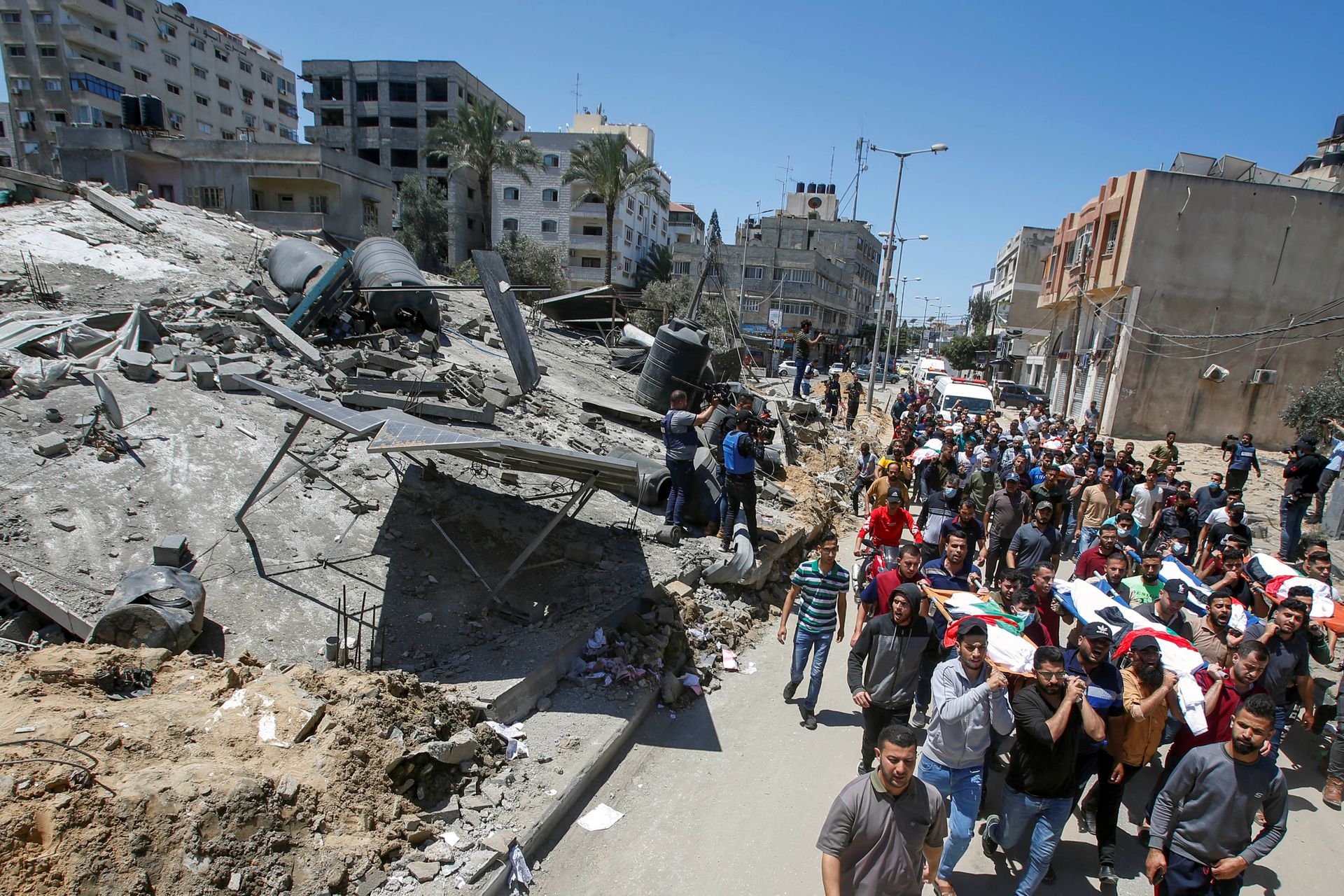 JERUSALEM (Reuters) – Israel continued bombardment on Gaza areas, including Al-Shata and Khan Younus, and Palestinian militants launched rocket barrages at Tel Aviv and other cities on Saturday, with no sign yet of an end to the worst escalation in years in the region, almost a week into the conflict.

At least 140 people, including 39 children, have been martyred in Gaza since hostilities erupted on Monday, Palestinian medics said.

The Israeli bombardment overnight killed more than 15 Palestinians in Gaza, medics said, including two woman and six children who died when their house in a refugee camp was hit. Five others died, with others wounded, the medics said.

According to the United Nations, 10,000 Palestinians have so far migrated from Gaza.

US and Arab diplomats are seeking to calm the situation. In Israel, thousands of Israelis ran for shelter. Sirens wailed repeatedly across Tel Aviv on Saturday. One rocket struck a residential building in the commercial hub's suburb of Ramat Gan, killing one person there, medics said.

In Gaza, Akram Farouq, 36, dashed out of his home with his family after a neighbour told him they had received a call from an Israeli officer warning that their building would be hit. "We haven't slept all night because of the explosions, and now I am out in the street with my wife and children, who are weeping and trembling," he said.

Regional and international diplomatic efforts have yet to show any signs of halting hostilities. Egypt, which has been leading regional efforts, sent ambulances across its border with Gaza to bring Palestinian casualties to Egyptian hospitals.

US President Joe Biden's envoy Hady Amr, deputy assistant secretary for Israel and Palestinian affairs, arrived in Israel on Friday, before a meeting on Sunday of the UN Security Council. The US Embassy said in a statement that the envoy aimed 'to reinforce the need to work toward a sustainable calm'.

Hostilities between Israel and Gaza have been accompanied by violence in Israel’s mixed communities of Jews and Arabs. Synagogues have been attacked, Arab-owned shops vandalised and street fights have broken out. Israel’s president, who has a largely ceremonial role, has warned of civil war.

Palestinian casualties also extend beyond Gaza. Palestinians, who each year on May 15 mark their displacement in the 1948 war around Israel's creation, have reported 11 people killed this week in the occupied West Bank after protesters and Israeli forces clashed.

Egypt was pushing for a ceasefire so talks could start, two Egyptian security sources said on Friday. Cairo has been leaning on Hamas and pressing others, such as the United States, to secure an agreement with Israel.

"The mediators from Egypt, Qatar and the United Nations are stepping up their contacts with all sides in a bid to restore calm, but a deal hasn't yet been reached," a Palestinian official said on Friday.

The United Arab Emirates called on Friday for a ceasefire and talks, offering condolences to all victims. In September, the UAE and Bahrain became the first Arab states in a quarter century to establish formal ties with Israel.

Living conditions in Gaza are worsening, with households now receiving just four hours a day of power instead of the usual 12, after lines from Israel and Gaza's sole power station were damaged, officials said. Fuel was also running low.

Israel’s military said on Saturday about 2,300 rockets had been fired from Gaza at Israel since Monday, with about 1,000 intercepted by missile defences and 380 falling into the Gaza Strip.