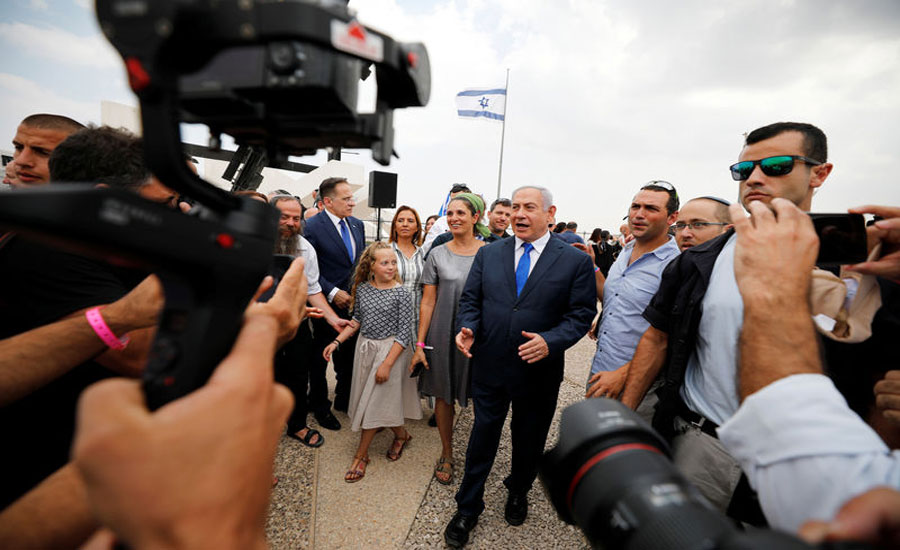 JERUSALEM (92 News)/Reuters - Israeli cabinet met on Sunday in the Jordan Valley, a largely agricultural area, to approve it legal status for an unauthorised outpost and Jewish settlement. Israeli Prime Minister Benjamin Netanyahu had announced on Tuesday that he intended to annex if he wins a fifth term. Israeli cabinets have rarely held sessions in the West Bank. Netanyahu has stepped up a bid for far-right votes two days before a closely-contested election, convening his cabinet in the occupied West Bank . At the meeting, the government announced it had approved Netanyahu’s proposal to turn the outpost of Mevo’ot Yericho into a formal settlement - 20 years after it was established as a farming community in the Jordan Valley without state sanction. In public remarks at the session, Netanyahu said it would be up to the government formed after Tuesday’s election to grant final approval. The timing of the cabinet’s move was widely seen in Israel as another bid by Netanyahu to swing support from small ultranationalist parties to his right-wing Likud in an election that follows an inconclusive poll in April. Just days after voicing anger over Netanyahu’s Jordan Valley annexation plan, Palestinians said no Israeli government decision could give legitimacy to settlements in occupied territory. “The Palestinian people are the only decision-makers on their land,” said Nabil Abu Rudeineh, a spokesman for Palestinian President Mahmoud Abbas.

Appealing to far-right voters and Likud’s own supporters to turn out in large numbers, Netanyahu has been portraying himself as being in lockstep with ultranationalists over retaining West Bank land through annexation. Ballots cast for far-right parties, rather than for Likud, he has said, could deny it victory in a close race. In Israel, voters choose a party’s list of parliamentary candidates, rather than individuals. Opinion polls show Likud and its main challenger, the centrist Blue and White party led by former armed forces chief Benny Gantz, running neck and neck, meaning coalition-building is key to determining an ultimate winner. Scores of outposts, unauthorised by Israeli governments, dot the West Bank, in addition to some 120 settlements that have been built in the area since its capture in the 1967 Middle East war. The Palestinians and many countries consider all Israeli settlements in the West Bank to be illegal under the Geneva Conventions relating to occupied territory. Israel disputes this, citing security needs and biblical, historical and political connections to the land. Palestinians seek a state in the West Bank and Gaza Strip, with East Jerusalem as its capital.

The foreign ministers of the Organization of Islamic Conference (OIC) met in a hurriedly called session and condemned the Israeli act. The session rejected the illegal settlement outright.