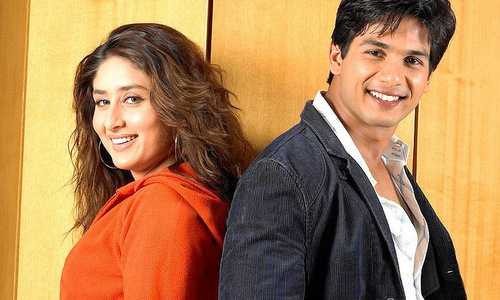 MUMBAI (Web Desk) - Bollywood actress Kareena Kapoor will soon be seen in ‘Bajrangi Bhaijaan’ opposite Salman Khan and ‘Udta Punjab’. ‘Udta Punjab’ has everyone curious since Kareena will be working with none other than former flame Shahid Kapoor. But, Kareena clarified that the duo will not exactly share screen space in the film which also stars Alia Bhatt and Ayushmann Khurrana. “Ya, I know everyone is saying we are back but the movie is like American Hustle. Everyone has different tracks in the film and we aren’t going to be sharing screen space. But yes, good to be working with Shahid, he has really evolved as an actor,” said Kareena in an interview to NDTV. On being asked about reuniting with ‘Bodyguard’ co-star Salman Khan, Kareena said, “People are excited to see me and Salman but the catch here is Kabir Khan. You would see Salman in a never before role and honestly, I am as excited as the audience.” Kareena, who was in New Delhi for the launch of a new range of ice cream, stayed clear off the whole All India Bakchod controversy. When asked if she had watched the AIB roast of Arjun Kapoor and Ranveer Singh, she said, “Oh no please, I really have no interest in watching it.” She further added, “India has better and far more important things to worry about than AIB.”