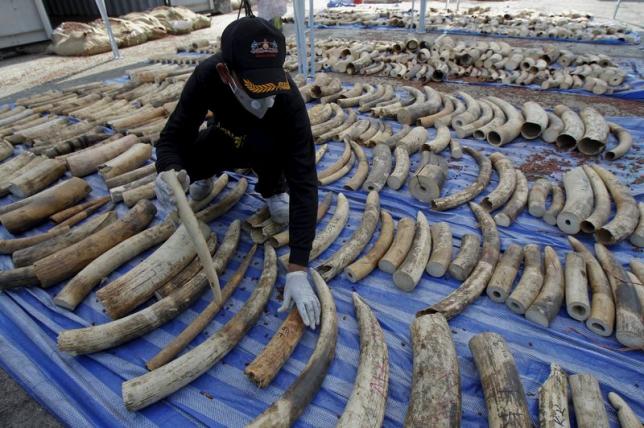 BANGKOK - Thai customs officials have seized four tonnes of ivory worth $6 million, authorities said on Monday, in what the department called the largest bust of its kind in Thailand's history. The elephant tusks were hidden in bags containing dried beans in containers originating from the Democratic Republic of Congo, the Thai Customs Department said in a statement, and were bound for Laos. The seizure comes as Thailand - a top destination for African ivory smuggling in Asia - is under increasing pressure to crack down on its illegal ivory trade. Thailand was given until the end of March to take measures to shut down domestic trade in ivory or face sanctions under the Convention on the International Trade of Endangered Species (CITES). Any sanctions could impact Thailand's trade in species covered by the convention, including ornamental plants such as orchids. "We consider this the biggest seizure in Thai history. We believe that this ivory was due to be sold to customers in China, Vietnam and Thailand," the Thai Customs Department said in a statement. Somchai Sujjapongse, Director-General of the Customs Department, said the ivory was discovered on April 18 when officers acted on a tip-off. Much of the ivory smuggled into Thailand from other countries is turned into ornaments that are shipped to China and Vietnam to meet burgeoning demand. China announced a one-year ban on the import of African ivory carvings in February, ahead of a visit by Britain's Prince William, a vocal animal welfare activist. In January, Thailand passed new legislation to regulate and control the possession and trade of ivory. Under the law, possession of African ivory for sale in Thailand is prohibited. Over 20,000 African elephants were killed for ivory in 2013, a CITES monitoring program showed, leaving a population believed to be around 500,000. - Reuters