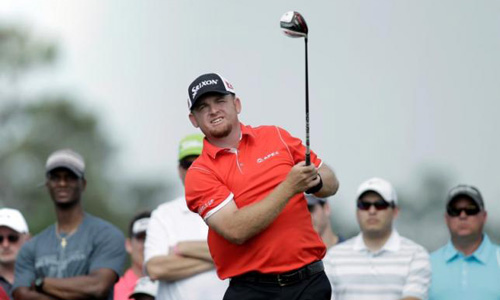 TEXAS - Long-hitting J.B. Holmes completed a perfect Masters tune-up when he won the Houston Open in a three-way playoff on Sunday. Holmes came from six strokes behind in the final round with a sizzling eight-under-par 64 that included nine birdies in the first 12 holes at the Golf Club of Houston in Humble. Three hours after posting a 16-under 272 total, he made a tap-in par at the second extra hole, the par-four 18th, to outlast fellow American Johnson Wagner, who missed a five-foot par putt. Overnight leader Jordan Spieth was eliminated at the first extra hole. Holmes collected $1.188 million for his fourth PGA Tour victory. The 33-year-old had already qualified for the Masters, the first major of the year starting on Thursday. He has played the tournament once. "It was just a great day for me and it ended good too," Holmes told reporters. "I didn't tee off expecting to win today. It's a nice surprise. I started out with five birdies. After that I thought I had a chance." Wagner, who played on a sponsor exemption, needed to win to punch his ticket to Augusta, and he gave himself a chance when he sank a 25-foot putt at the 72nd hole to join the playoff. “Birdieing 18 to even get into the playoff was pretty incredible,” he said. “I’m pretty bummed right now, but a lot of good stuff going on.” Spieth missed a chance to enter the Masters as the world number two, but remained the hottest player in the game, after finishing first, second and second in his past three starts. The 21-year-old was eliminated from the playoff after flinching on a greenside bunker shot, a mistake he initially blamed on a noise from the gallery, before backtracking slightly. “I heard something, or maybe it was just me,” he said. “It’s not really an excuse but I had a really good lie and I just got down into the sand a lot quicker than I normally do there and caught it fat." Spieth said the past month of being constantly in contention was an ideal preparation for the Masters, where he tied for second last year. “I feel as prepared as I think I could be. I felt more and more comfortable with more and more pressure, and that gives me a lot of confidence going into Augusta, where you probably have the most pressure anywhere.” - REUTERS