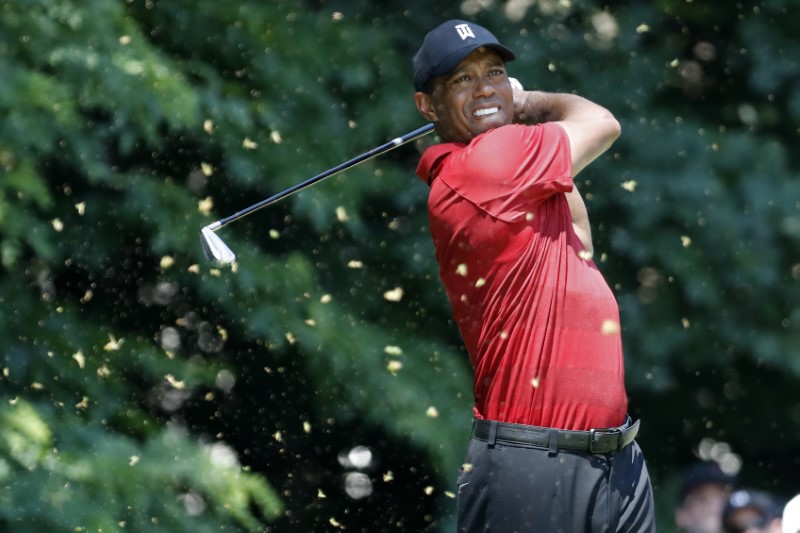 LONDON (Reuters) - With Britain having basked in a tropical heatwave for the past month, Tiger Woods may be tempted to revisit the strategy he used for his memorable 2006 Open win at Hoylake when he competes in golf’s oldest major on Thursday.
Woods spurned the driver 12 years ago, making best friends for the week with his two-iron to tame the fast-running, sun-baked fairways of Royal Liverpool and record a two-stroke triumph over fellow American Chris DiMarco. Course and weather conditions could be similar at Carnoustie next week and Tony Jacklin, the 1969 British Open and 1970 U.S. Open champion, says the 14-times major winner could have a considerable advantage over the majority of the field. “If Tiger can get his putting right you wouldn’t rule him out,” Jacklin told Reuters. “From tee to green his ball-striking has been pretty good since he returned from his back injury at the end of 2017 and a bit of links golf might just whet his appetite. “Tiger’s two-iron worked brilliantly for him at Hoylake all those years ago. I don’t think he used his driver once that week. “I suspect this hot spell has made the course very fast and, if the wind whips up, it could live up to its ‘Car-nasty’ reputation and Tiger will understand how to handle whatever it might throw at him,” said Englishman Jacklin. “He realises it’s not about overpowering a links course, it’s about staying in play and being patient. At least 50 percent of the field won’t know anything like as much as he does about plotting their way round.” Jacklin, who chalked up 19 worldwide wins and is regarded as one of his country’s finest post-war golfers, recalled one of the last rounds he played at the British Open to underline how important course strategy is on a links layout. “I was playing with American Jeff Maggert and he used a driver on almost every hole,” explained the 74-year-old. “I thought to myself, ‘what the hell are you doing that for?’. “I didn’t say anything because I didn’t know him well enough but you cannot expect to get around a links course doing that. It’s not possible. “If it’s a week when 70 percent of the time the players are just trying to keep the ball in play with those two-iron ‘stingers’, it could be a factor for Tiger. If he makes a few putts I wouldn’t bet against him,” said Jacklin. “Tiger has won three British Opens and has played a monumental amount of links golf. If he doesn’t need the driver, it will be a big plus for him, because for me that club is his weakness.” Jacklin, who is also the most successful European captain in Ryder Cup history after claiming two wins and a tie in four matches in charge from 1983-89, has been critical in the past of the modern player’s reliance on the rescue club in breezy conditions. The rescue club provides more loft than the two-iron, making it tougher to control the ball in the wind, and Jacklin is pleased the top players have had a tactical rethink in recent months. “Almost all of them have started to use the driving iron, the two-iron, again so some sanity has come back into the game,” said Jacklin, who together with Shelby Yastrow has written a new fictional book entitled ‘Bad Lies’ that is available on Amazon. “The quicker these links courses play, the more difficult they are as it’s harder to control the ball. I doubt whether any of the top players will be without their driving iron because it seems to have come back into the bags in the last year.”