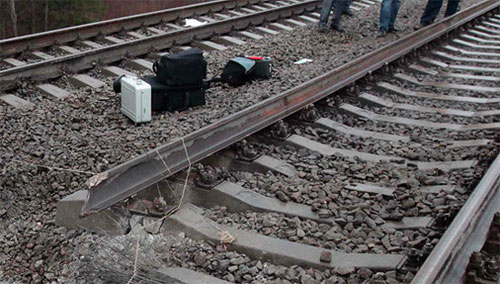 JACOBABAD (Web Desk) - At least 22 people including two women were injured when a bomb went off at a railway track in southern Pakistan's Jacobabad district on Thursday morning. Some unknown militants blew up explosive materials fixed at the railway track with a remote controlled device when a passenger train was passing by in Noor Wah area of Jacobabad, a main district in the country's south Sindh Province. The train Khushhal Khan Express was on its way from east Punjab province to the country's southern port city of Karachi. Four to six compartments of the train, carrying over 50 people, derailed in the explosion that also left at least four feet of the track destroyed. Eyewitnesses said that the explosion happened near the last compartments of the train. The injured people have been shifted to a nearby hospital while the railway traffic was halted in the area following the blast. Pakistan Railways authorities reached the scene and started repair work to restore the traffic. No group has claimed responsibility for the attack yet.