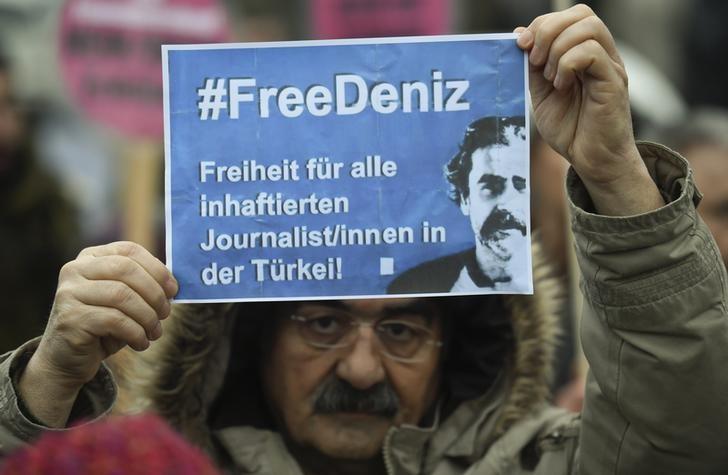 BERLIN (Reuters) - Deniz Yucel, a German-Turkish journalist detained by Ankara since February, has accused Turkish President Tayyip Erdogan of subjecting his entire society to a “regime of fear” and said Turkey is drifting toward fascism.

Yucel, 44, a correspondent for the newspaper Die Welt, made the remarks in a lengthy interview with the German newspaper die tageszeitung to be published on Saturday.

Turkish authorities arrested Yucel, on Feb. 14 on charges of propaganda in support of a terrorist organization, during a wave of arrests prompted by a failed coup attempt in July 2016.

Germany is backing a complaint filed by Yucel with the European Court of Human Rights, and has repeatedly called for him and other Germans being held in Turkey to be released.

The detentions have contributed to a sharp deterioration in relations between the two NATO allies.

In total, Ankara has jailed more than 50,000 people pending trial and suspended or dismissed some 150,000 state workers including teachers, judges and soldiers since the coup, which Turkey blames on the movement of U.S-based cleric Fethullah Gulen. Gulen has denied any role, and condemned the coup.

Yucel also said that even his prison guards were afraid of making a wrong move: “A regime of fear is not directed solely at its critics, but also affects members of the oppressive apparatus.”

He said Erdogan himself had the most to fear: “He knows what to expect if he loses power, and that is why he is subjecting the whole society to his regime of fear.”

Yucel said he hoped the European Court would act quickly on his case after a Nov. 28 deadline for Turkey to submit its position, but that he was not sure what to expect.

He said that, like many of Erdogan’s critics, he was disappointed that the court had rejected cases brought by teachers and government workers affected by the crackdown, which Erdogan says is necessary to guarantee Turkey’s stability.

“But I also know the European Court of Human Rights was founded to deal with individual human rights violations, not to stop a whole country drifting into fascism,” he said. The newspaper said the interview had been conducted in writing via Yucel’s lawyers.