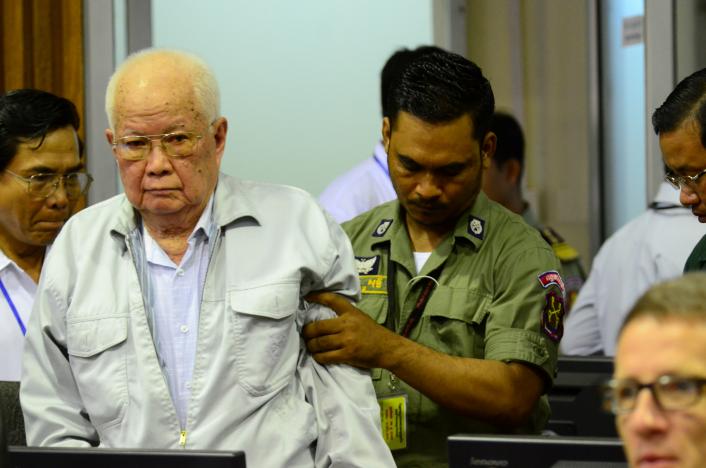 PHNOM PENH - A Cambodian Supreme Court chamber on Wednesday upheld a life sentence for two top cadres of the 1970s Khmer Rouge found guilty of crimes against humanity, a decision a UN envoy said sent a message to leaders in North Korea and elsewhere. Most of the victims of the Khmer Rouge 1975-79 "Killing Fields" regime died of starvation, torture, exhaustion or disease in labour camps or were bludgeoned to death during mass executions. A fifth of the population was killed. The UN-backed Supreme Court Chamber said Khmer Rouge "Brother Number Two" Nuon Chea, 90, and former President Khieu Samphan, 85, had been found guilty of crimes against humanity, murder, persecution on political grounds and other inhumane acts over the forced evacuation of the capital, Phnom Penh, after the fall of the city in 1975. "The Supreme Court Chamber affirms the sentence of life imprisonment imposed by the trial chamber on both Nuon Chea and Khieu Samphan," judge Kong Srim said on Wednesday. "The Supreme Court orders that Nuon Chea and Khieu Samphan remain in custody." David Scheffer, the UN Secretary-General's envoy to the tribunal, said that the judgement sent a message to leaders around the world. "What happened today in this courtroom ultimately can reach your domain," Scheffer told reporters at the court, naming Islamic State in Syria, among others. "I will just say in closing that perhaps the leadership of North Korea should take particular note of what occurred here today," Scheffer said. "...International justice isn't backing down, it is actually forging ahead." A 2014 report by the United Nations, which referred to North Korean leader Kim Jong Un by name in connection with suspected human rights abuses, triggered a strong reaction from Pyongyang, including a string of military provocations. Reclusive North Korea, which has carried out a string of nuclear and missile tests in violation of UN Security Council resolutions, regularly threatens to destroy South Korea and its main ally, the United States. The Cambodian trial chamber's first verdict and sentence in 2010 was life in jail for Kaing Guek Eav, alias "Duch", head of the notorious Tuol Sleng prison, where as many as 14,000 people were tortured and executed. Nuon Chea and Khieu Samphan were both in court to hear the ruling. The two face separate charges of genocide in a second phase of the complex, ongoing trial. There were initially four defendants. Former Foreign Minister Ieng Sary died in 2012. His wife, Ieng Thirith, a former minister, died in 2015. The Cambodian government also welcomed the court judgment. "We express our hope that this trial and today's delivery of the final judgment brings some relief for your pain and suffering," Deputy Prime Minister Sok An said, addressing survivors of the Khmer Rouge regime. -Reuters