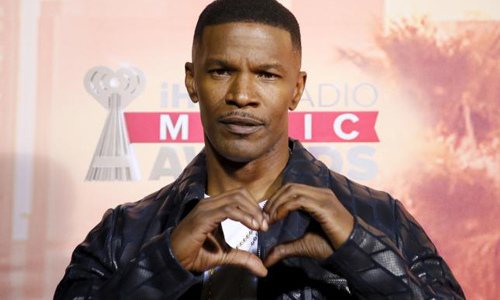 LOS ANGELES - Actor-singer Jamie Foxx came under fire on Monday from LGBT-youth group The Trevor Project for "insensitive comments" he made at an awards show about reality star Bruce Jenner and reports of his decision to transition to a woman. At Sunday's iHeartRadio awards show, televised on NBC, host Foxx joked twice about the transition by Jenner, an Olympic gold medalist and patriarch of the Kardashian-Jenner family on reality TV. "Bruce Jenner will be here doing some musical performances. He's doing a his and her duet all by himself," Foxx quipped on stage. "Look, I'm just busting your balls - while I still can," he added in his opening monologue with a large photo of Jenner on a screen behind him. The Trevor Project, which provides support and counseling for lesbian, gay, bisexual, transgender and questioning (LGBTQ) youth, said "insensitive comments made in the media only exacerbate the problem," in response to Foxx's jokes. "Given all the struggles that LBGTQ youth face on a daily basis, comments like these don't help to promote an atmosphere of tolerance and understanding," the organization said in a statement on Monday. Representatives for Foxx and Jenner declined to comment. Jenner, 65, has not publicly discussed his transition into a woman but has told his family, according to media reports. He has reportedly agreed to an interview with TV personality Diane Sawyer on ABC to discuss his transition. - REUTERS