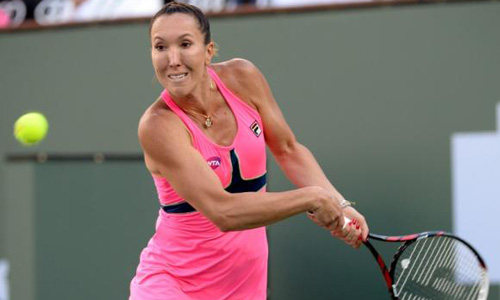 CALIFORNIA (Reuters) - Jelena Jankovic eased into the last four at the BNP Paribas Open on Thursday when Ukrainian qualifier Lesia Tsurenko retired from their quarter-final with an ankle injury while trailing 6-1 4-1. Former champion Jankovic broke an error-prone Tsurenko twice to breeze through the opening set in 22 minutes and twice more in the second before the Ukrainian walked across to her opponent and told her the match was over as they shook hands. "It's never nice to end a match in that way," Serb Jankovic, 30, said on another hot day at the Indian Wells Tennis Garden. "In the second set, she started limping and I saw that she had some problem. "I had to just focus on my game and try to make as many balls as possible in the point. I was feeling pretty good out there. I was playing my game and waiting for my chances to execute. I was solid. "I'm really sorry she got injured. She has had such a great tournament, she has beaten a lot of great players in the draw. Unfortunately she couldn't play a great match today." Tsurenko, ranked 85th in the world, injured her right ankle during her upset of sixth-seeded Canadian Eugenie Bouchard in the previous round and was noticeably restricted in her movement against Jankovic. She failed to hold serve in the second and sixth games of the match to be swept aside in the opening set before calling for her trainer to re-tape her ankle. Tsurenko, who double-faulted five times during the curtailed match, was again broken in the first and fifth games of the second set before she retired. Jankovic, who won the 2010 BNP Paribas Open, will take on either reigning champion Flavia Pennetta of Italy or Germany's Sabine Lisicki in the semi-finals. Pennetta, who crushed an ailing Agnieszka Radwanska of Poland 6-2 6-1 in last year's final, was due to face Lisicki later on Thursday in the quarters. The other semi-final will be contested by top seed Serena Williams, back at Indian Wells after a 14-year boycott of the event where she alleged she had suffered racist abuse from fans, and Romanian Simona Halep. American Williams, who clinched her 19th grand slam singles title at this year's Australian Open, and world number three Halep both advanced from the quarters on Wednesday.