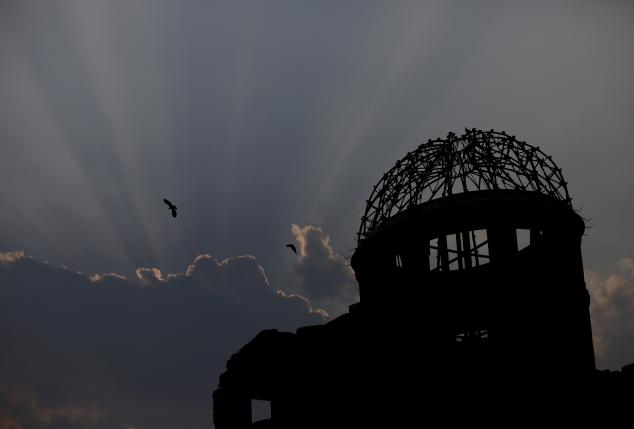 FUKUSHIMA - When Atsushi Hoshino set out to revive a group representing atomic bomb survivors in the rural northeast Japanese prefecture of Fukushima 30 years ago, one topic was taboo - criticising the nuclear power industry upon which many relied for jobs. That changed dramatically after March 11, 2011, when a massive tsunami devastated the Fukushima Daiichi nuclear plant, triggering meltdowns, spewing radiation and forcing tens of thousands of residents to flee their homes. "Until then ...I felt somewhat uncomfortable about nuclear power, but not enough to oppose it. Rather, I was in a situation where it wasn't possible to oppose it," Hoshino, 87, told Reuters at his home in Fukushima City, about 60 km (37 miles)from the wrecked Fukushima Daiichi plant, the country's first commercial nuclear plant when it went online in 1971. Now, Hoshino, a survivor of the Aug. 6, 1945, U.S. atomic bombing of Hiroshima, is among the majority of Japanese who oppose Prime Minister Shinzo Abe's plan to reboot reactors taken offline after the Fukushima disaster. Kyushu Electric Power Co's (9508.T) Sendai plant in southwestern Japan is expected to resume operations on Aug. 10, the first to do so in nearly two years. "I think that since the risk of nuclear power and the fact that human beings cannot control it has become clear, none of the reactors should be restarted," Hoshino said. Akira Yamada, chairman of Fukushima's atomic bomb survivors group, says he reached a similar conclusion. Still, both men are wary of comparing the risks of nuclear power to the horror of atomic weapons. "There is a difference between military use and peaceful use," Yamada, who like Hoshino became a professor at Fukushima University after the war and later served as its president, told Reuters. STARK MEMORIES Seventy years after the Hiroshima and Nagasaki bombings, the experiences of the elderly survivors remain seared in their memories. Hoshino was a high school student deployed to a munitions factory when a U.S. bomber dropped an atomic bomb on Hiroshima, killing nearly 140,000 people by the end of the year. Three days later, a second atomic bomb was dropped on Nagasaki. On Aug. 15, Japan surrendered. For Hoshino, who had been out of the city but returned to search for missing classmates, one of his starkest memories is of finding two friends, one seemingly unhurt but unconscious, the other barely alive with his entire body - including nose, lips, and eyes - burnt and blackened like charcoal. The first died in a truck en route to their dorm. The other was alive, but his body was already infested with maggots, which Hoshino removed with tweezers, until that friend died, too. "Even now, I cannot forget the appearance of those friends who were victims of the atomic bombing," he said. Nagasaki survivor Yoshiteru Kohata, 86, who returned to his birthplace in Fukushima a few years after the war's end, says he long tried to forget the days after the bombing, when he helped injured and carried corpses up to the mountains for burial. Recounting his experiences, such as hearing a young woman screaming "Please stop, Please stop," as an army doctor operated on her wounds without anaesthetic, still distresses him. "Even now, when I tell the story, tears well up and my chest gets tight," added Kohata, a retired schoolteacher. DOOMED TO LOSE Yamada, 89, who was at home 2.5 km from the centre of the explosion when the bomb fell on Hiroshima, filling the sky with black clouds and red flames, says he knew early on that Japan was doomed to lose the war. While Yamada was in middle school, his cousin, one year older, decided to apply to Yokaren, an Imperial Navy pilot school that ultimately trained many of the "kamikaze" pilots who flew suicide missions in the final months of the conflict. "I told him, 'Give it up. Japan cannot win this war'." His cousin joined anyway and in February 1945 came to say farewell. "'We have no gasoline. We have no planes. All I can do is die'. You stay alive and work for Japan'," Yamada quoted his cousin as saying. Two months after Japan's surrender, the family was notified that his cousin had died in the bloody battle of Iwo Jima. Kohata said he, too, might have flown to his death had not an army colonel told him not to quit school and train as a pilot. "There were many who died at the age of 16," he said. Like many "hibakusha" survivors, Yamada, Hoshino and Kohata are harsh critics of Abe, whose conservative agenda includes easing the constraints of Japan's pacifist, post-war constitution on the military and adopting a less apologetic tone over the war. Abe is set to mark the 70th anniversary of the war's end with a statement that some fear will dilute past apologies. "If you delve into the atomic bombings which had such inhumane results, it was because we fought that ... war of aggression," Yamada said, calling Japan's wartime leaders "murderers". "But Mr. Abe is not delving deeply." Hoshino was even blunter. "I don't think Shinzo Abe ... truly recognises that the war was a criminal war of aggression." -Reuters