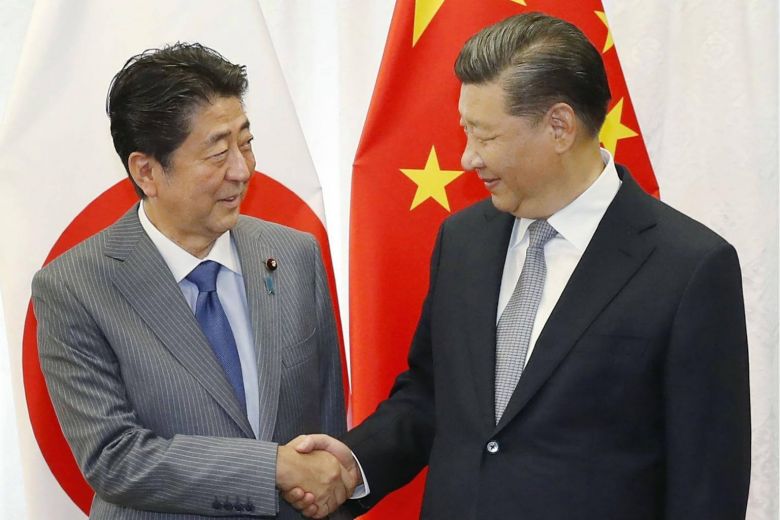 TOKYO (Reuters) - Japan’s prime minister travels to Beijing on Thursday for his first formal bilateral summit with Chinese leaders in seven years as the Asian rivals seek to build on a thaw in ties against the backdrop of trade friction with Washington. China has stepped up its outreach to Japan and others as it has locked horns over trade with the United States. Japan, worried about China’s growing naval power, is keen for smooth economic ties with its biggest trading partner. It must manage that rapprochement without upsetting its key security ally, the United States, with which it has trade problems of its own. Prime Minister Shinzo Abe, who returned to power in 2012 when Sino-Japanese ties were in tatters due to a feud over East China Sea islands, has met Chinese President Xi Jinping many times since their first chilly conversation in 2014 on the sidelines of a regional summit in Beijing. But his meeting with Xi on Friday will be the first full-scale Sino-Japanese summit since 2011. Abe will meet Premier Li Keqiang on Thursday and attend a reception to mark the 40th anniversary of a peace and friendship treaty. Both sides hope more visits will follow. “If Xi promises to come to Japan next year, that would be very big,” said Kiyoyuki Seguchi, research director at the Canon Institute for Global Studies in Tokyo. “If that is realised, the improvement in Japan-China relations will accelerate.” A slew of agreements are expected, from a currency swap arrangement and a new dialogue on innovation and intellectual property protection to better communication between their militaries. Japan also hopes for progress towards implementing a 2008 agreement on jointly developing gasfields in disputed waters, and wants China to ease import limits on produce from areas affected by the 2011 Fukushima nuclear disaster. A business forum on private sector cooperation in third countries is expected to yield some 50 non-binding agreements, including one on a project in Thailand, a Japanese government source said. China may be hoping that Abe makes a positive statement about its Belt and Road initiative, a vehicle to fund and build transport and trade links in more than 60 countries.

The Belt and Road project has come under fire for saddling poor nations with debt through big projects that are not economically viable. China rejects the criticism. Japanese participation could help the initiative’s image and allay fears of debtor nations, officials say. But Japanese defence officials are wary of its military implications, and Tokyo is pushing its Free and Open Pacific Strategy to promote trade and infrastructure in Asia, Africa and the Middle East. Japan also wants to ensure any joint projects with China are transparent, open and fiscally sound, officials said. “We’re ready to discuss tangible cooperation in third countries, but ... we think we do not need to label this cooperation with some ‘initiative’,” a Japanese foreign ministry official said. In a symbol of China’s economic rise, Japanese Foreign Minister Taro Kono said this week Japan was ending its development assistance to China, after halting the bulk of aid more than a decade ago. Instead, they will seek ways to help others. Despite the thaw, mistrust persists. War-time history still rankles, with China often complaining that Japan has not fully atoned for its occupation of parts of China before and during World War Two. Japan is wary of China’s military spending and its dominance of the South China Sea, through which much of Japan’s trade flows. A recent survey showed 86 percent of Japanese had a “bad image” of China. “Abe will try to develop relations,” said Akio Takahara, a China specialist at the University of Tokyo. “But at the end of the day, if strategic targets are different, we won’t be able to establish a stable relationship.”