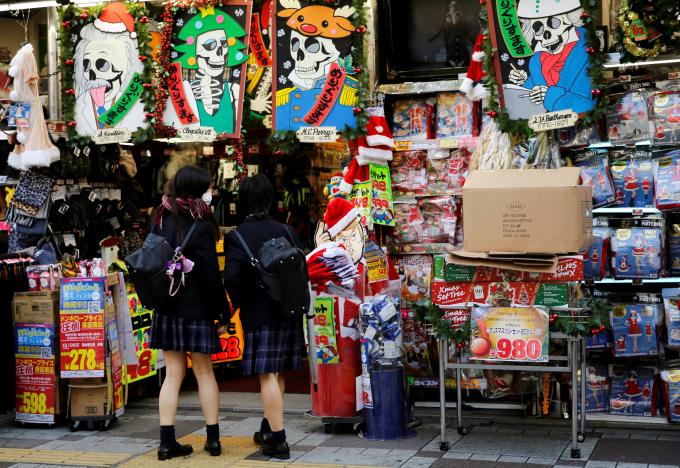 TOKYO - Japan's core consumer prices marked the ninth straight month of annual declines and household spending slumped in November, data showed on Tuesday, suggesting that the economy still lacks enough momentum to jump-start inflation toward the central bank's ambitious 2 percent target. Core consumer prices in Tokyo, a leading indicator of nationwide price trends, fell at the fastest pace in nearly four years, highlighting the challenges policy-makers face in eradicating Japan's sticky deflationary mindset. But analysts expect inflation to accelerate next year reflecting a recent rebound in oil costs and yen declines that push up import prices, easing pressure on the Bank of Japan to top up an already massive stimulus program. "It's clear trend inflation was weak until December because prices were falling for many non-energy items," said Yoshiki Shinke, chief economist at Dai-ichi Life Research Institute. "But inflation will turn positive and may accelerate to around 1 percent in summer or autumn next year. That's bad news for consumers but good news for the BOJ as it tries to achieve its price target." The core consumer price index, which includes oil products but excludes volatile fresh food prices, slipped 0.4 percent in November from a year earlier, government data showed, compared with a median market forecast for a 0.3 percent fall. Core consumer prices in Tokyo, available a month before the nationwide data, fell 0.6 percent in December from a year earlier, as weak clothing sales forced retailers to cut prices. It was the biggest annual drop since February 2013, when prices fell by the same margin, and exceeded the 0.4 percent drop projected by analysts in a Reuters poll. SPENDING STILL WEAK Japan posted a third straight quarter of annual expansion in July-September and analysts expect growth to pick up in coming quarters, thanks to a recent pick-up in exports and factory output driven by improvements in emerging economies. The BOJ offered an upbeat view of the economy at its rate review last week, while the government raised its assessment of the economy for the first time in nearly two years. Policy-makers hope that prospects of a sustained recovery will prompt companies to boost wages and household spending - a particularly soft spot in Japan's economy, the world's third-largest. Separate data showed the jobs-to-applicants ratio rose to 1.41 from 1.40 in the previous month, matching a median market forecast and reaching the highest level since July 1991. But household spending fell 1.5 percent in November from a year earlier to decline for the ninth straight month, suggesting that slow wage growth was keeping consumers from shopping. A pick-up in inflation may prove to be short-lived if the rising cost of living hurts consumption, some analysts say. The BOJ has repeatedly pushed back the timing for achieving its inflation target with more than three years of aggressive money printing having failed to spur public expectations that prices will rise ahead. -Reuters